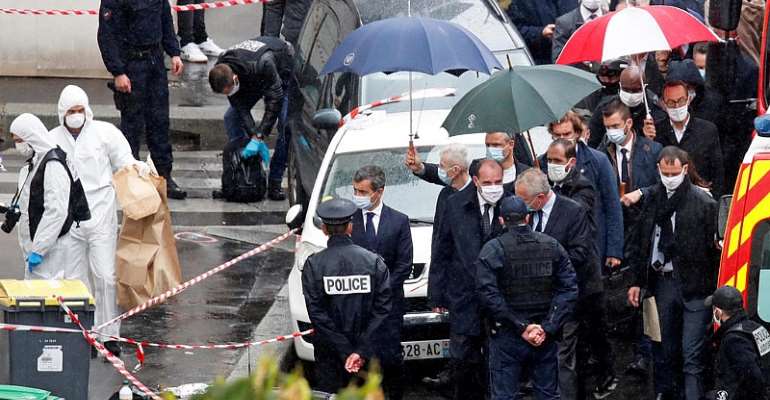 French police have detained a former flatmate of a man arrested over a knife attack near the former offices of satirical weekly Charlie Hebdo that left two wounded, bringing the total number of people in custody to seven.

A man thought to have been a flatmate of the main suspect was taken in for questioning late on Friday judicial sources confirmed on Saturday.

It is believed the pair shared a hostel together in the Val-d'Oise department north of Paris.

Police also late Friday released another man who was close to the scene of the attack but who was later confirmed to have been a witness who had "chased the assailant", the source said.

A total of seven people are now being held in connection with the stabbing, which left two journalists wounded.

They include the "main perpetrator", who was arrested not far from the scene, prosecutors said.

Five more people arrested in the Paris suburb of Pantin during a search of a property linked to the main suspect were also being held, according to the judicial source.

Coincidental timing
France's counterterrorism prosecutor said authorities suspect a terrorist motive because of the place and timing of the stabbings: in front of the building where satirical magazine Charlie Hebdo was based until the Islamic extremist attack on its cartoonists and at a time when suspects in the 2015 attack are on trial across town.

An investigation for attempted murder as well as "conspiracy with terrorists" has been launched by the anti-terror prosecution office against the main suspect, who was not previously known for 'radicalisation'.

Described as an 18-year-old man of Pakistani origin, he arrived in France three years ago as an unaccompanied minor, apparently from Pakistan, the interior ministry said.

For French Interior Minister Gerald Darmanin, the attack was "clearly an act of Islamist terrorism", although he admitted that authorities had "underestimated" the threat against the street next to Charlie Hebdo's former offices.

Security failings
Luc Hermann, the co-head of Premieres Lignes, where the two victims worked, told BFMTV that since the start of the trial "there has been absolutely no security for this street and symbolic building", as questions emerge over possible security failings.

Early warning signs emerged this week when the satirical magazine's human resources director was forced to move house after receiving threats to her life deemed credible by intelligence services.

Charlie Hebdo has angered many Muslims around the world by publishing cartoons of the Prophet Mohammed over the years, and in a defiant gesture reprinted some of the caricatures ahead of this month's landmark trial, triggering new threats from Al Qaeda.

Symbolic site
Prime Minister Jean Castex, who visited the "symbolic site" of Friday's attack, promised the government's “unfailing attachment to freedom of the press, and its determination to fight terrorism.”

Castex also added that the injuries the two victims had sustained in the attack were “not life-threatening”.

The victims--a man in his 30s and a 28-year-old woman--worked for documentary film company Premières Lignes, according to founder Paul Moreira. They were taking a cigarette break when they were attacked with an axe by an attacker who then fled into the subway, Moreira told BFM Television.

In a Twitter post, Charlie Hebdo expressed its support for "the people affected by this odious attack".

They were victims of "fanaticism" and "intolerance", Charlie Hebdo said, calling the main suspect and his possible accomplice "terrorists".

Lawyers at the trial for the alleged accomplices of brothers Said and Cherif Kouachi, the perpetrators of the 2015 attack on Charlie Hebdo, expressed their dismay and shock at Friday's attack, calling it a cruel repeat of history.