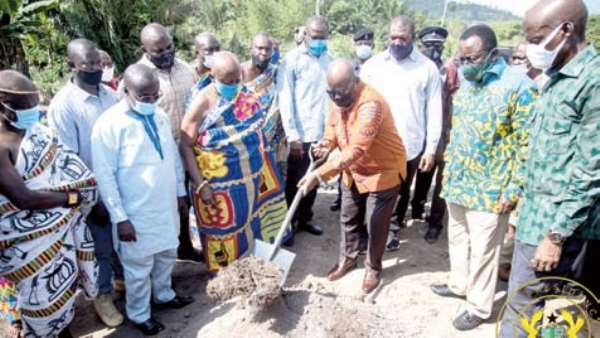 President Akufo-Addo has said the governments of the New Patriotic Party (NPP) are noted for bringing forth good and innovative policies as well as interventions for the cocoa sector.

According to him, the Cocoa Pest and Disease Control (CODAPEC) and Hi-Tech (fertilizer) programmes were introduced under the first NPP administration led by former President J. A. Kufuor, while his government had also introduced the novel hand pollination programme, mass pruning exercise, motorized weed slashers and pruners.

Speaking at the launch of the National Cocoa Rehabilitation Programme in Sefwi-Wiawso in the Western North Region on Thursday, President Akufo-Addo said the innovative programmes were aimed at sustaining the cocoa industry and improving the livelihood of cocoa farmers and their dependents.

He indicated that the CODAPEC and Hi-Tech programmes, apart from ensuring equal access to fertilizers and other farm inputs, had also facilitated the formation of cocoa farmer groups and cooperatives across the country.

He disclosed that this had seen more than 3,000 farmers registered with the Department of Cooperatives, adding that it also came up with the introduction of the new early or spring mass spraying policy.

The President said his government had also introduced an irrigation programme on cocoa farms which, he noted, was about to be scaled up from pilot trials besides the enhanced cocoa rehabilitation programme that the President launched on that day.

He intimated that since his assumption of office on January 7, 2017, the NPP government led by him had not relented in its quest to give the cocoa industry the necessary boost and facelift it deserves.