Voters Register: If The Whole Luis Suarez Can Be Made To Cry Today,  Is The NPP Immune From Weeping Tomorrow? 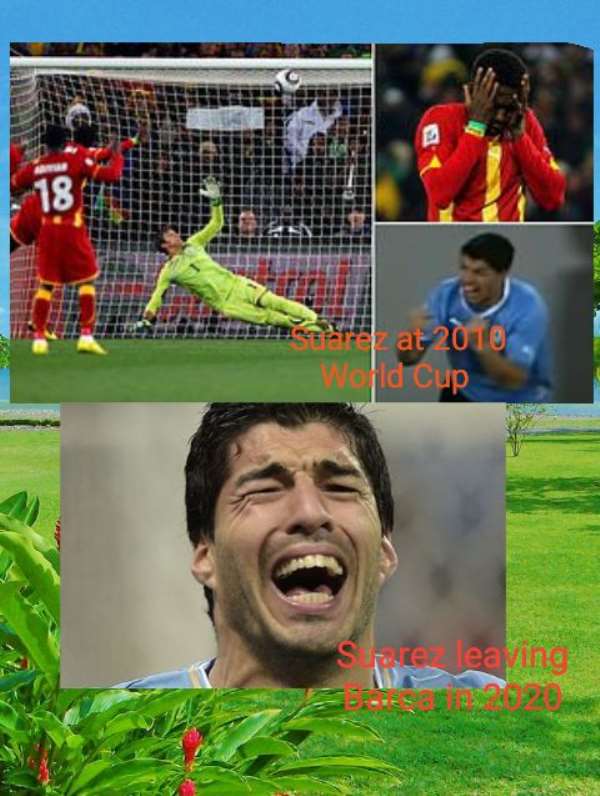 In the 8th round of the 2010 World Cup, in the last game of that round, getting to the last minute of that game, the whole world had a history in mind to write, one which would have changed the history of football forever.

Africa's Ghana Black Stars were playing against the South American giants Uruguay. As the first of its kind to be hosted on African soil, and the Black Stars being the only remaining African team in the global showpiece, Blacks everywhere, minorities anywhere, and haters of injustice at every corner were behind the Black Stars to nail the Uruguayans to rekindle the glowing flames of justice.

The captain of the Ghanaian side, Asamoah Gyan, stood behind the novel ball for that mondial tournament; in Nelson Mandela's South Africa: _jabulani._

Famed for making the mark in his penalty kicks, the all time best Ghana national team goalscorer, and Africa's player with more world cup goals, was assured in to add another feather to his cup and punish those who steal justice as in the Uruguayans.

That about-to-make history penalty kick to be taken by Asamoah Gyan was caused by Luis Suarez. A player famed for all the evils in the game with passionate following. He bites his opponents, he spit on others, he score offside goals, and he scores with his hands too.

This time, his hand was involved, but not to punish the opponents, the Black Stars, Africa's torchbearer by scoring with his hand. But he punished the history making team by using his hand to stop a goal-bound ball poached to the Uruguayan net by the Ghanaian youngster Dominic Adiyyah.

According to the gurus of the game, since the centre referee red-carded and sent Suarez off from the game, and from where he shoved the ball off behind the team's goalkeeper, it should have been rewarded to the Black Stars as an unchallenged goal.

But no, he whistled it for a penalty. The Ghanaian fans never feared nonetheless, we had Asamoah Gyan on our side. Ghana will in a moment proof to the world that "after all the Blackman is capable of managing his own affairs and march to greatness". We're without doubt, entering the semi finals, the last four of the game. The first country in Africa to reach such feat.

As if a hot iron had been pierced through the innocent hearts of the Ghanaian fans, the skipper flew the ball above the goal posts, ricocheting the bar and falling into the waiting hands of the spectators behind the Uruguayan goalkeeper.

The whole of Africa became quiet as seen at cemeteries, and the faces of the Black supporters in the stadium were streaming with tears.

But one Luis Suarez, who was ordered to leave the field was seen jumping in jubilation at the touchline of the turf. He was celebrating the pains and anguish of the Ghanaians, Africans and lovers of justice.

Though the game ended in a penalty shootout decider, but the African Hopes had already been killed by the Luis Suarez.

Ten years down the line, Suarez is now 33 years old, and he's crying as he's been told by a new coach, Ronald Koeman, that he's a surplus to the Barcelona team. He had wished to be treated with love and justice and be maintained at Barcelona camp, where he's been for the past six years, scoring 198 goals for them, winning 4 Laliga cups, and one European cup with them. Even, his tears would have dried early if his dream destination to Juventus, playing alongside Christiano Ronaldo, did not fail due to travel issues with the Italian authorities.

But Ghana's enemy number one Suarez is crying the more because he's been bought a pittance €15million by Atletico Madrid to replace Alvaro Morata who now joins the Italian giants to wear one Jersey as the world champion Christiano Ronaldo.

Such is life. What goes around comes around.

Today, the incumbent NPP in electioneering year is using the electoral commissioner's boss to steal justice from the Ghanaian voters in the upcoming December 7 polls.

When the National Democratic Congress (NDC) occupied the highest seat of Ghana, we could have used our power and influence to expunge the names of the NPP supporters from the voters register in the name of cleaning the register. But no, we respect justice, and will play by the game.

Knowing how our presidential candidate, former President John Dramani, is received in his nationwide tours in places where the NPP's presidential candidate was rejected owing to their incompetence for reneging on their 2016 campaign promises, they've resorted to rigging the upcoming polls to perpetuate their sakawa on innocent Ghanaians.

The whole world is watching unconcerned, and the innocent perishing Ghanaians only bet their hopes in the NDC to lit the torch of justice. Our only hopes Insha Allah is another Ronald Koeman rising in the Ghanaian voters soon, and the Luis Suarez in NPP will weep their way out of the FlagStaff House (Jubilee House), as the lovers of justice crown president: John Dramani Mahama to #RescueGhana from the hands of Sakawa boys.