On The Secession Of The Togolanders 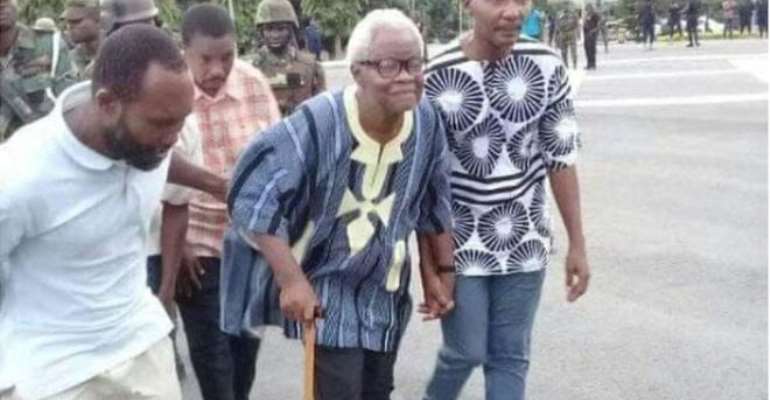 We live in an illusion of security in this country without recourse to the lessons of the past. Since independence, no soldier or police officer or security agent has ever fought to protect the people from anything. The security forces have never protected the government or the justice system or the media or the education system or the banks or the prison system. And the sooner we get this clear, the less disappointed we will be in thinking that they are going to fight to quell the secession going on in Western Togoland. They are not going to fight. They are going to run.

What the typical Ghanaian security officer knows how to do best is to run away into the bush upon the slightest threat to his life. And so this whole business of depending on the security apparatus to protect the country is for naught. The military officers and the police officers and the security agents will run away into the bush upon the first gunshot, even before the ordinary citizens follow.

And that is exactly what happened on June 4, 1979. On that day, decorated officers ran helter-skelter into the bush at the first gun-shot, and were pursued by their subordinates and juniors who put them in guardrooms and humiliated them for days. These officers failed to give even the most basic orders to save the situation; or found themselves petrified by sheer fear to act according to their oaths.

And even General Odartey-Wellington, often celebrated for bravery, was so stupefied by events of that day that he surrendered himself at the Nima Police Station, and was brutally murdered by ragtag soldiers. All the stories about his resistance were patently false……

In the end, it was an army general, Hamidu, who announced the surrender of the forces to the coup-makers and handed victory, together with the whole of the country, to these motley crowd of undisciplined soldiers and sell-swords. And so it was that an unplanned insurrection led by nobody, interrupted the country’s pathway to democratic governance, and brought Jerry Rawlings to power by sheer force of accident. Having tasted power and found the security system to be so porous, Rawlings staged another coup and held this country hostage for nineteen years.

And so today, if there is no coup in the country, and our democracy has been intact for nearly three decades, it has absolutely nothing to do with the fact that there is now in place better security arrangements as such. It is merely because the mass of Ghanaians will protect that democracy with their very blood. The proportion of Ghanaians who prefer that democracy remains the chosen form of government in this country appears overwhelming; so there is no opportunity for any military adventurism. But if this situation changes at any time in the future, the government will certainly be overthrown. So in this instance, all that the government has to do is to maintain confidence in the people themselves, of the tenacity and competence of the democratic governance, so that they will give their lives to protect its overthrow.

If the government is depending on the military and the police and the security agencies for its protection and survival, it has to note that there is no record in our country where these agencies have offered protection per se to the government.

The security agencies remain rogue and parasitic bodies looking for loopholes to cannibalize themselves and to fall foul of their sworn duty to protect the government and people of Ghana. And as I have already stated, at the first gunshot, no officer or man will put down his life to save anybody. They will all be running into the bush to save their own skins as happened in all the coups in this country.

These people have never gone to war against this country’s enemies. Rather the record reflects that they have turned their guns on the citizens of the country, killing them, torturing them, raping them, beating them……… The genitalia of men and women have been mutilated by some in the security agencies after some of these coups.

And so why should anybody pretend that these security agencies who have never protected this country in any way will, all of a sudden, take arms to protect the unitary state of this country from these separatists? In fact, at the first gunshot emanating from these Western Togolanders, every one of them will run into the bush.

It is not as if they will even start fighting; they will merely run helter-skelter into the bush. And we should count ourselves lucky if they don’t willingly hand over their arms to their opponents and point out to them where the leaders they have sworn to protect are hiding.

And in case we have some illusion about this possibility, we should look at the confusion these people recently created. They blocked roads and put up flags and sign-boards and gave the security agencies an ultimatum to leave their territories or surrender their arms. And how could they have done all these if they did not know how porous and compromised the security of the country was? Where were the police or the soldiers or the BNI?

So far, what the generality of the people have done is to scoff at these people, calling them names, insulting their tribes and threatening to crush them. Who is going to crush them? And so far, who has done anything significant to them?

When the Biafran secession occurred in Nigeria in 1967, there were those who treated the whole idea with similar contempt, but Nigeria is still struggling to contain the consequences of its effects. Nigeria is still fighting the Boko Haram in spite of its military might. But at least in the Nigerian situation, there is a fighting force in existence, albeit an ineffective one.

In Ghana, there will not be any fighting force resisting anything at any time. Every fighter will desert the front and go home to their wives and family. Period. Nobody will fight because nobody has ever fought. Nobody is going to have the heart to go kill these W T’landers or get killed by these W T’Landers. Nobody will see the point of that sacrifice

So that if there is some modicum of commitment and discipline among them, they are likely to succeed. And if they do not, they have the time and history on their side to give this country a good fight for the money. That is why we have to take them seriously.

Most of us would like Ghana to stay united and are therefore against whatever they are doing to separate from this country. At the same time, can understand all the issues at stake and put in a good suggestion. The best way to deal with the issue is to discuss their grievance, not to dismiss them. They have very little to lose; we have very much to lose.