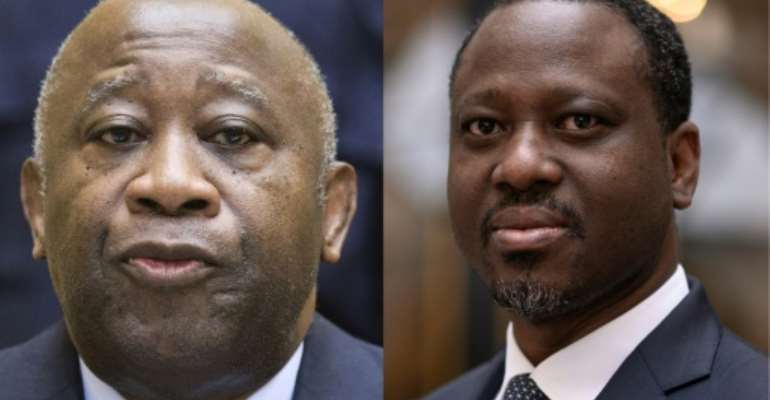 Gbagbo (L) and Soro have been barred from contesting and have been sentenced for alleged corruption. By MICHAEL KOOREN, Lionel BONAVENTURE (POOL/AFP/File)

Ivory Coast should allow former president Laurent Gbagbo, who has been barred from key presidential elections next month, to stand, the African Court on Human and Peoples' Rights said Friday.

It was the second time in 10 days that the court, established by African Union members in 2004, called on the Ivorian state to allow a barred candidate to take part in the tense October 31 election in the world's top cocoa grower.

The court, based in Arusha in Tanzania, asked Ivory Coast to "take all necessary steps to immediately remove all obstacles" preventing Gbagbo from participating.

Ivory Coast withdrew its recognition of the court's jurisdiction in April this year.

Gbagbo, who was president from 2000 to 2010, is not on the electoral roll which was updated this year, and thus cannot vote or be a candidate.

The Constitutional Council, Ivory Coast's top court, has rejected 40 of 44 applications to contest the election, which is taking place against a backdrop of extreme tension.

Those barred include Gbagbo, 75, and former rebel leader Guillaume Soro, 47, both of whom played key roles in the crisis that engulfed the country after disputed elections in 2010.

The Ivorian court, however, accepted an application by President Alassane Ouattara, 78, who is seeking a third term despite criticism that this sidesteps constitutional limits.

Gbagbo was freed conditionally by the International Criminal Court (ICC) in The Hague after he was cleared in January 2019 of crimes against humanity. He is living in Brussels pending the outcome of an appeal against the ICC ruling.

His candidacy was rejected by the Constitutional Council on the grounds that he was handed a 20-year jail term by an Ivorian court last November over the looting of the local branch of the Central Bank of West African States during the post-election crisis.

The African Court, whose ruling is provisional, also said Gbagbo's conviction should not be included on his judicial record until it had time to deliver a full judgement.

On September 15, the African Court handed down a verdict in Soro's favour, saying Ivory Coast should also "immediately remove all obstacles" preventing him from competing in the ballot.

Soro provided military help that enabled Ouattara to come to power after a civil war that erupted when Gbagbo refused to accept defeat in the 2010 election.

More than 3,000 people died in the fighting.

Soro, who lives today in France, was barred from contesting the election on the grounds of a 20-year sentence, also in absentia, for alleged embezzlement of public funds, handed down in April.

Ouattara, has blasted attempts by Gbagbo and Soro to contest the presidential election as "provocation" and said one of them belongs behind bars.

"Soro, like Gbagbo, was excluded because he has a criminal record," Ouattara told the French magazine Paris Match.

"Each of them are perfectly aware that their candidacies are based on provocation... Guillaume Soro doesn't deserve to be on the campaign trail but in prison," he said.

"This young man, drunk on money and power, has simply lost his head."

MPs split heads as anti-LGBTQ+ bill to be laid in Parliament...
12 minutes ago

Angola President in Ghana for 3day visit
17 minutes ago