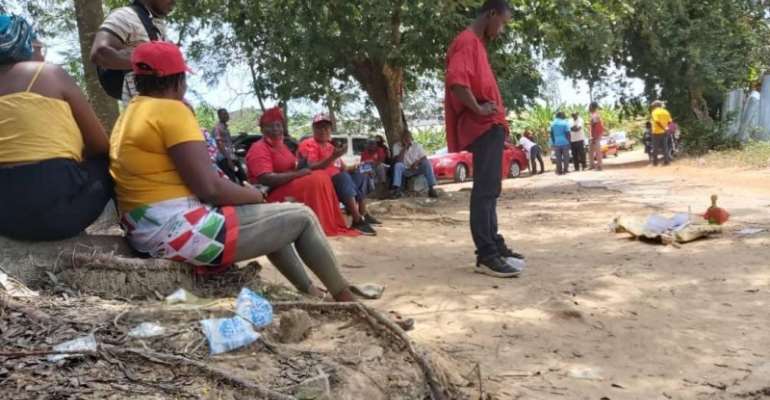 Dr Kwamina Minta Nyarku, the opposition National Democratic Congress (NDC) parliamentary candidate for the Cape Coast North Constituency and some party supporters on Thursday picketed at the Regional office of the Electoral Commission (EC) to demand the release of his voter ID card.

This followed an Accra High Court ruling on Tuesday, September 22 instructing the EC to register Dr Nyarku on grounds that he had not been barred from registering as a voter by a Court.

However, the politician was yet to be issued his ID card by the EC as of Thursday, a situation which had not gone down well with his supporters in the constituency.

The party supporters who were clad in red with hand and headbands abhorred the decision of the EC to continue to withhold the ID card and demanded its release.

Dr Mintah Nyarku's card was withheld by the EC following a successful challenge by a party agent at Nkanfoa, a suburb of Cape Coast, where he registered.

He told the GNA on Thursday that the National, regional and Metropolitan offices of the EC had been served with the order from the high court and thus could not phantom why it was still holding on to his voter's ID card.

Dr Mintah Nyarku and his supporters were left disappointed as all efforts to get his ID card from the EC proved futile.

He, however, said he was confident that the issue would be resolved to enable him to file his nomination to contest the 2020 parliamentary elections on the ticket of the NDC.

It would be recalled that during the voter registration exercise in July, Dr Nyarku registered at the Nkanfoa Electoral Area in Cape Coast and was duly issued with a voter ID card.

However, his registration was challenged on the basis that he was not a resident of the electoral area, leading the EC to direct him to handover the voter ID card until the completion of the challenge process.

Dr. Mintah Nyarko then proceeded to the Cape Coast High Court, but lost again, however, the Court presided over by Mrs. Patience Mills-Tetteh mentioned that his right to register and to vote had not been curtailed.

The Court further stated that he could register in the electoral area where his residence was located.

Based on the ruling and in accordance with article 42 of the 1992 Constitution, Dr Nyarku applied to the EC demanding to be registered as a voter at the Pedu Electoral Area where he resides.

The High Court in Accra on Tuesday granted the mandamus application compelling the Electoral Commission to register the Candidate.