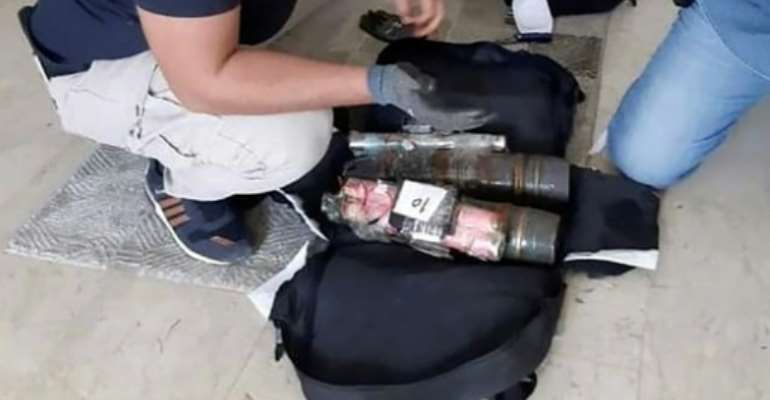 A photo released in July 2020 by the US military purports to show an improvised explosive device brought to the Libyan capital Tripoli by the Wagner Group, a Russian-backed private military contractor. By Handout (AFRICOM/AFP/File)

Germany on Friday pressed Russia and China to allow the release of an interim UN report on violations of the arms embargo on Libya that found violations by Moscow-linked fighters.

"We have not been able to reach an agreement on this point. I hope that the two delegations who have a problems with this will give a green light," Guenter Sautter, Germany's deputy ambassador to the United Nations, told reporters before a closed-door Security Council meeting sought by Berlin.

The interim report by experts, submitted to the Security Council in August and widely leaked, said that the Wagner Group, a Russian military contractor reputed to be close to the Kremlin, have committed numerous violations.

Interim reports are generally not released, unlike final reports.

Germany, which heads the committee on the Libya sanctions, wants to "make sure that we have transparency on this issue," Sautter said.

"We need to name and blame and shame those who blatantly violate the arms embargo," he said.

The document, seen by AFP, found rising international support at the time to both strongman Khalifa Haftar -- who is backed by Russia, Egypt, Saudi Arabia and the United Arab Emirates -- and the UN-recognized government that has support from Turkey.

"The arms embargo remains totally ineffective. In the cases of those member-states directly supporting the parties to the conflict the violations are extensive, blatant and with complete disregard for the sanctions measures," it said.

Asked about the report by AFP in a discussion with several journalists, the foreign minister of the United Arab Emirates, Anwar Gargash, rejected the accusations and said his country would not comment on a report it had not read.

"We categorically deny these. Our position is very clear, especially since the Berlin conference (in January), of the necessity of a ceasefire," he said.

The UN-backed government and Haftar-linked parliament in eastern Libya last month reached a fragile ceasefire, raising hopes of bringing peace to a nation in turmoil since the Western-backed overthrow of Moamer Kadhafi in 2011.

Your independence will be respected – Akufo-Addo assures new...
23 minutes ago

He has the capacity, intellectual strength to succeed – Akuf...
28 minutes ago