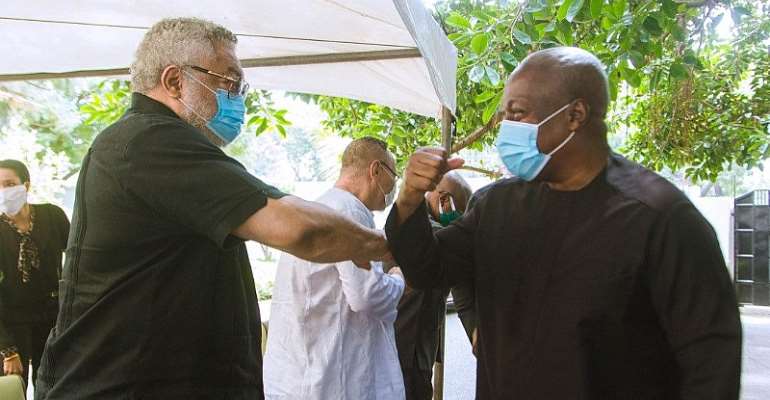 Former President John Dramani Mahama, and the leadership of the NDC, on Friday, September 25 called on former President Jerry John Rawlings to commiserate with him following the passing of his mother, madam Victoria Agbotui.

Mr. Mahama, in a brief remark, described the loss of madam Agbotui as a shared one because she was always on hand to give wise counsel whenever she interacted with him and other party members.

He consoled Jerry John Rawlings and encouraged him to take heart as his mother has lived a full life and had seen it all.

The NDC flagbearer said, “Mama was the kind of person one would assume would live forever…”

He also assured the NDC Founder that the party will participate fully in the funeral activities of the late madam Agbotui.

He [Mr. Mahama] was accompanied by the Vice Chairman of the NDC Council of Elders, Alhaji Mahama Iddrisu, National Chairman Samuel Ofosu Ampofo, General Secretary, Johnson Asiedu Nketia and other national executives of the party.

Madam Victoria Agbotui died in the early hours of Thursday, September 24 at the age of 101.

Meanwhile, Former President Jerry John Rawlings and his family have asked the public to respect their privacy as the family mourns the death of Victoria Agbotui, the mother of the former president.

This was contained in a press statement issued by the office of the former president on Friday, September 25, 2020.

The family also urged persons wanting to pay courtesy visits to the family to secure an appointment.

“The family kindly requests all to respect their privacy during this difficult period. All who wish to pay courtesy visits should kindly call 0264444464 to secure appointments,” the statement noted.