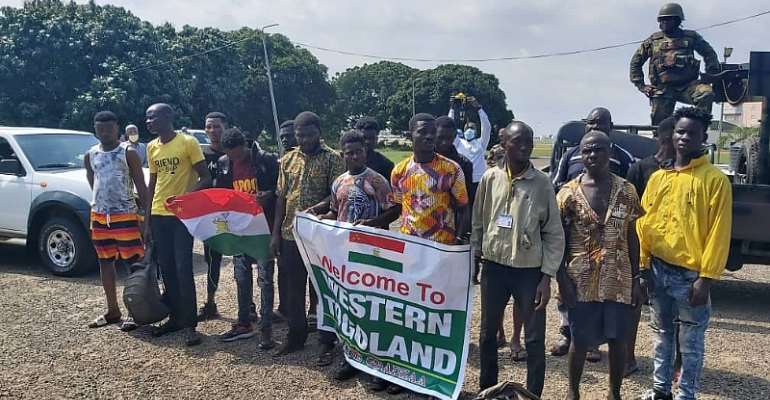 The thirty-one suspected Western Togoland secessionists who are members of the Homeland Study Group have been arrested and airlifted to Accra.

The list includes 30 males and one female aged between 16 and 70 years.

Their details have since been taken by a joint security task force and transported to the Bureau of National Investigations headquarters for investigations to commence.

The members of the secessionist group were picked up by the Ghana Armed Force and the Ghana Police Service at Abortia near Joapong in the Eastern Region.

The Police had earlier urged persons travelling from Accra to Ho, Aveyime, Adidome, Mepe, Akuse, Sogahkope, and Aflao to be cautious because of heavy vehicular traffic.

The Police in a Facebook post said, “Good morning Ghana, commuters to and from Accra to Ho, Aveyime, Adidome, Mepe, Akuse, Sogakope and Aflao are likely to experience traffic due to security operations within those areas.”

“Anybody travelling on any of those roads should exercise caution,” the Ghana Police Service urged in a post on Facebook.

About the Western Togoland group

The Homeland Study Group wants the Volta Region to be an autonomous country known as Western Togoland.

Over 80 members of the separatist group were subsequently arrested for assembling for a protest over the arrest of the seven leaders of the Homeland Study Group Foundation.

The Western Togoland is a member of the Unrepresented Nations and Peoples Organization (UNPO).