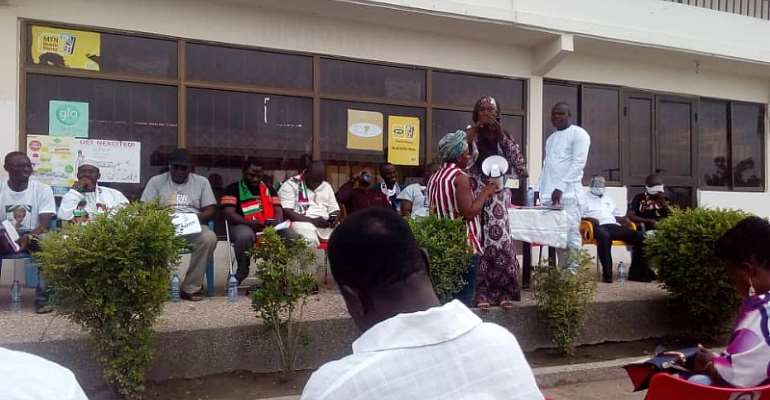 Members of the National Democratic Congress (NDC) in the Awutu Senya East Constituency are poised to campaign for the NDC to win both the presidential and parliamentary elections in the December 7 general elections.

The constituency inaugurated various ward campaign teams to disseminate messages of the Peoples' Manifesto' of the party to constituents.

Over the weekend, the Otamens Ward together with the CP Ward inaugurated it ward campaign teams ahead of December 7.

Branch Chairman for Universal Base in the CP Ward Mr Mumuni Iddissah during the inauguration at CP Ward said the campaign constitutes branch members across the ward to ensure an intensive door to door campaign.

According to him, Kasoa has been denied development since the NPP government assume power in 2017.

He said policies such as the legalization of Okada riding, free primary healthcare, creation of 1million jobs among others by the NDC in the 2020 general elections will fasten development in the area.

"We in the Awutu Senya East Constituency know what the NDC has done in this constituency. All these infrastructural developments you see in Kasoa and its environs were constructed by the erstwhile Mahama administration.

"The Kasoa interchange, polyclinic, circuit and district court, community day E-block school, the Kaosa Amansaman road and the Tuba new road are among the numerous developments undertaken by the NDC and based on this will win massively in Kasoa".

However, the current government he said has ignored Kasoa and has nothing to show as achievement in the constituency. Based on this, the team is ready to campaign massively for John Dramani Mahama and the NDC to attain power come December 7.

"We are prepared to unseat representative of the NPP, current member of parliament for the area," he said.

He urged constituents and the public to vote for the NDC to put the country's economic drive back on track.

A member of the campaign team also stated that the people of Kasoa and its environs deserves better. According to the campaign team member, developments has halted under the current government and that there's the need to bring the NDC back to continue the developmental agenda in the constituency.