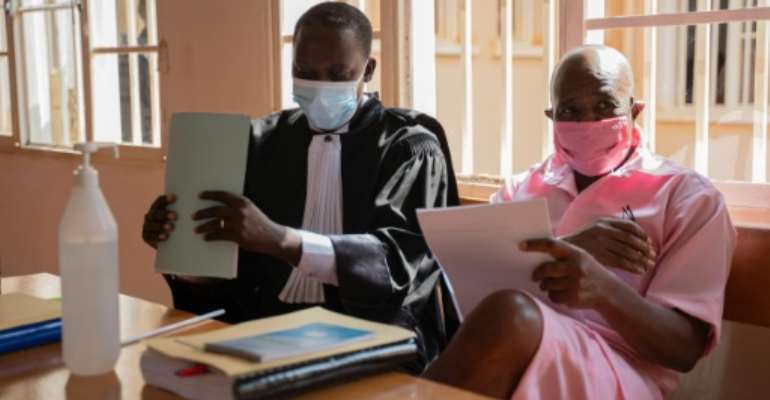 'Hotel Rwanda' hero Paul Rusesabagina, right, dressed in a pink prison uniform, sits next to his lawyer, David Rugaza, at the Nyarugenge Court of Justice in Kigali. By Simon Wohlfahrt (AFP)

Paul Rusesabagina, the polarising hero of the hit movie "Hotel Rwanda," admitted to a Kigali court on Friday that he had helped form an armed group but denied any role in its crimes.

Rusesabagina is famed for his depiction by Don Cheadle in the 2004 film in which a moderate Hutu is shown as saving hundreds of lives at a luxury hotel during the 1994 genocide, which left some 800,000, mostly Tutsi, dead.

However, a more complex image has emerged since he appeared in Kigali under arrest in mysterious circumstances last month, after years living in Belgium and the United States.

He is being tried on 13 charges including terrorism, financing and founding militant groups, murder, arson and conspiracy to involve children in armed groups.

In 2017 Rusesabagina co-founded the Rwandan Movement for Democratic Change (MRCD), an opposition party based abroad.

During the hearing he admitted to the formation of an armed wing, the National Liberation Front (FLN), which has claimed responsibility for a series of attacks in Nyungwe, near the border with Burundi.

"We formed the FLN as an armed wing, not as a terrorist group as the prosecution keeps saying. I do not deny that the FLN committed crimes but my role was diplomacy," he said in court Friday.

In April 2019, Rwandan authorities arrested the commander of the FLN, Callixte Nsabimana, who had previously claimed responsibility on social media for attacks including setting fire to a passenger bus in 2018, leaving two dead and many injured.

However in court, Nsabimana tried to distance himself from the killing of civilians.

"When we attacked the Nyungwe area, we had given FLN specific orders that whatever operation they launch, it should be about destroying bridges, ambush military vehicles, attack government offices as well as police and military camps. We didn't expect them to attack civilians," Nsabimana said in court last year.

Nyungwe is a region popular among tourists coming to see endangered mountain gorillas and the attacks prompted many western countries such as France, Germany, Canada and Australia to advise their nationals against travel to the area.

In a 2018 video supporting the FLN, Rusesabagina said: "The time has come for us to use any means possible to bring about change in Rwanda, as all political means have been tried and failed."

Rusesabagina left Rwanda in 1996 along with other moderates who believed the space for political opposition was fast shrinking.

The release of the Oscar-nominated film "Hotel Rwanda" thrust him into the global spotlight, giving him a greater platform for his criticism of Kagame's government.

A file picture from June 18, 2019, showing Rusesabagina speaking at an press conference in Brussels. By NICOLAS MAETERLINCK (BELGA/AFP/File)

Kagame, who has been in power since his troops flushed out the genocidal regime in 1994, is championed abroad for turning the country around.

However critics such as Rusesabagina accuse his government of authoritarianism, ruling through fear and crushing the opposition. Several critics of his regime have been assassinated abroad.

As Rusesabagina grew more critical, railing against Kagame's anti-Hutu sentiment -- an extremely sensitive topic in Rwanda -- so his image at home worsened as the regime attacked his character.

Detractors claimed he embellished his heroics, while some survivors groups accused him of profiting from their misery.

Rusesabagina's family said he would never have willingly returned to Rwanda, and the details of his arrest are still murky.

In an interview with The New York Times, Rusesabagina, speaking with Rwandan officials in the room, said he boarded a private jet in Dubai which he thought was taking him to Burundi, but landed in Kigali instead.

His family says Rusesabagina has not been allowed to consult with lawyers of his choosing.

A ruling on his bail appeal will be made on October 2.