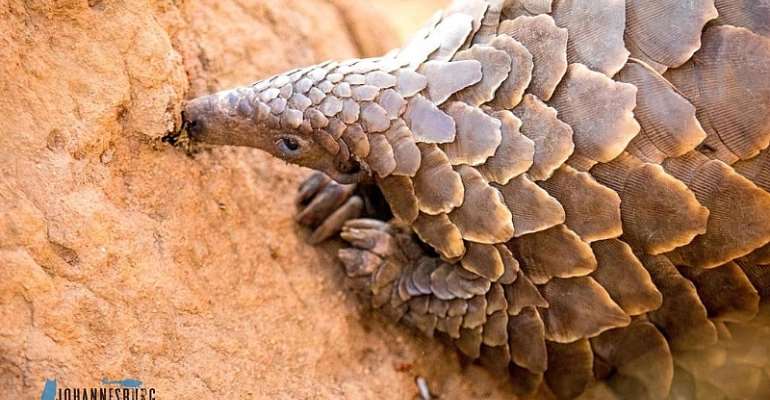 Scientists in Gabon have revealed how giant pangolins share their burrows with bats, potentially exposing the shy, nocturnal animals to viruses that could pass to humans in the central African markets where pangolins are slaughtered and traded.

Months before the global spotlight fell on pangolins in Asia and their possible role in the transmission of Covid-19, researchers from Gabon's Lope National Park were studying the nocturnal movements of a giant pangolin (Smutsia gigantea).

Using camera traps and an electronic tracking device, the team followed the pangolin to a number of its resting sites and eventually to nine of its burrows -- consisting of vast underground networks of tunnels and chambers.

Wildlife ecologist David Lehmann, who is director of research at the park and led the study, told RFI he and his team weren't surprised to find other animals like pythons, porcupines and the smaller white-bellied pangolins (Phataginus tricuspis) sharing the giant pangolin's burrows.

Crawling through tunnels
Other mammals use burrows to shelter from the elements or keep safe from predators, he said.

But the team was surprised to discover small colonies of at least three different species of bat, including Noack's round-leaf bats (Hipposideros ruber) hanging from the ceilings of the burrows. Some were discovered as deep as four metres underground at the end of 30 metre-long tunnels. Lehmann and his team noted then that the bats' proximity to the pangolins increased the risk of transmission of viruses.

“We proposed the first ecological evidence of a possible viral transfer and recombination of SARS-CoV strains (Severe Acute Respiratory Syndrome-type coronaviruses) between bats and pangolins in the wild,” he said.

Even though members of the team were crawling through the pangolin's tunnels months before the Covid-19 outbreak they were aware they were “entering a potential viral melting pot, along with other risks such as bumping into a python or a honey badger,” Lehmann explained.

Under threat
The temperature underground is a few degrees below that of the surface, a factor that helps the bats to reduce their metabolism and save energy.

“Retrospectively, it makes total sense for bats to take advantage of such habitat,” he said.

A separate study carried out between 2009 and 2015 and published in April this year in the journal Nature by a team led by scientist Gael Darren Maganga from Gabon's International Centre for Medical Research (CIRMF) in Franceville revealed that three insectivorous species of cave-dwelling bats in the north-east of the country harboured strains of coronavirus that are potentially zoonotic, that is, capable of spreading to humans.

Africa's four species of pangolin, three of which are found in Gabon, are under threat because they are trapped and sold for their meat on markets, or for their scales, which are illegally trafficked for use in traditional Chinese medicine.

Ideal for a 'zoonotic event'
In April, the government of President Ali Bongo Ondimba banned the consumption of pangolins and bats on public health grounds. Lehmann says the giant pangolin is a highly-protected species in Gabon, and the only trade in its meat takes place on the black market. But the other two species, the white-bellied and black-bellied pangolin (Phataginus tetradactyla) were, until recently, sold on local markets legally.

Ray Jansen, chairman of the African Pangolin Working Group, a South Africa-based network of pangolin conservationists and researchers, said conditions in wet markets in Wuhan were not unique.

He said similar markets in Africa present a “ticking time bomb” as far as public health is concerned.

“African pangolins are slaughtered and sold in bushmeat markets in Nigeria, Gabon, Sierra Leone, Cameroon, Ghana and all other countries in central and west Africa,” he told RFI.

“The conditions the animals are kept in and slaughtered under are absolutely ideal for a zoonotic event to explode in Africa.”