Police Officer, 2 Others Remanded Over Murder Of Cabbie 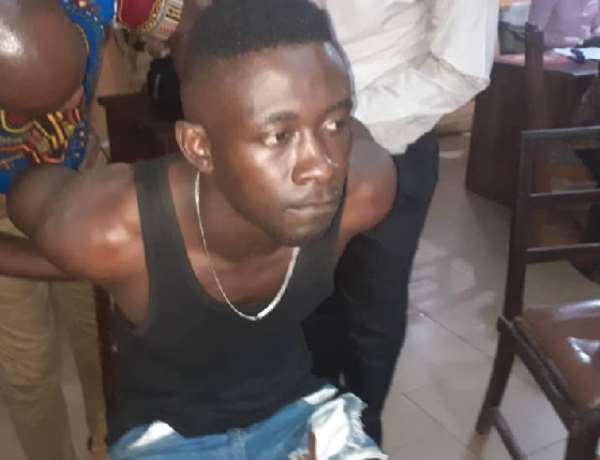 General Lance Corporal Bright Akosah, who allegedly shot and killed a taxi driver at Adjin Kotoku after robbing him of his vehicle, has been arraigned before an Accra Circuit Court.

Akosah, who was in dock with Ebenezer Tetteh, a trader, are facing a charge of conspiracy to commit crime, to wit murder and murdering 40-year old Samuel Tawiah.

Akosah, Tetteh and Francis Aidoo, aka Keche, have also been additionally charged with conspiracy to rob and robbery.

The accused persons have pleaded not guilty to the charge of conspiracy to rob and robbery.

The court, presided over by Evelyn Asamoah, however, preserved their pleas on the charge of conspiracy to murder and murder.

The court further remanded them into police custody to reappear on October 14.

George Asamani, counsel for the accused persons, prayed for bail on the charge of conspiracy to commit crime, to wit robbery, saying they were bailable offences but the court turned down the application.

The facts, as narrated by Assistant Superintendent of Police (ASP) Fuseine Yakubu, are that the deceased, Samuel Tawiah, is a resident of Afuaman, near Pokuase in Accra.

ASP Yakubu is a Police officer with the Police SWAT Unit at the Regional Police Headquarter in Accra.

Tetteh also resided at Agbogboloshie and Aidoo, a tailor, resided at Cape Coast.

On September 12, this year, prosecution said Akosah and Tetteh went to Adjin Kotoku and its environs to survey areas where their victims could easily be robbed.

He said the following day Akosah, dressed in his Police uniform, and armed with his pistol, instructed Tetteh to proceed to Adjin Kotoku to lay ambush at a spot they had agreed on.

Based on that Akosah went to Pokuase Junction to stop a Nissan Versa Taxi with registration; GW 6818-20 and lured the driver, Samuel Tawiah, to drive him to his site at Adjin Kotoku.

Prosecution said Akosah, who sat at the back seat, directed Tawiah to Tetteh's hideout and gave him (Tetteh) a signal to come out.

However, sensing danger, Tawiah tried to escape but Akosah pulled his pistol and shot him twice at the back. The two pulled Tawiah out and dumped him in the bush, where Akosah shot him for the third time in the left ear.

Akosah and Tetteh abandoned the deceased in the bush and informed Aidoo that they had succeeded in robbing a taxi cab and asked him to look for buyers for the vehicle, which they drove to Biriwa and packed there.

On September 14, this year, at about 8am, the Anti-armed robbery Unit of the CID, acting on intelligence, feigned interest in the car and therefore negotiated the price with Aidoo at GHC8,000.

Prosecution said Aidoo informed Akosah who agreed on the amount and subsequently asked him to bring the buyers but Aidoo was arrested in the process and took the Police to Elmina where Akosah was arrested with the Nissan Versa.

Also found on him were NP 22 Pistol, one magazine loaded with eight rounds of 9 MM ammunition, one wrap of dried leaves suspected to be narcotic drug, one lighter, iPhone Seven plus, One Itel phone, and a spanner.

A Police ID card, a Voter ID card, and a GCB Visa Card all bearing the name of Bright Akosah were also retrieved.

Prosecution said Akosah admitted the offence of robbery and mentioned Tetteh as his accomplice.

On September 16, this year, Akosah led the Police to arrest Tetteh near the Awudome Cemetery who confessed that he (Akosah) shot and killed Tawiah when he tried to snatch his vehicle.