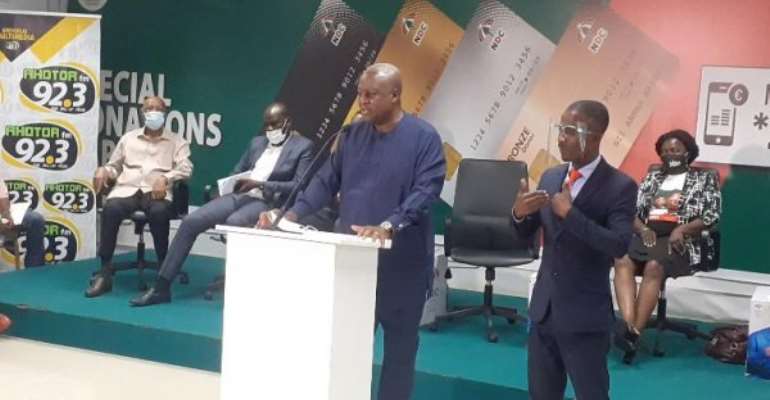 Former President John Mahama is asking the Electoral Commission (EC) to publish in full all names of applicants with defective ID cards on its website to ensure transparency in the voter exhibition exercise.

Mr Mahama expressed concern about the many irregularities which had characterised the ongoing voter exhibition exercise including omission of names, duplication of numbers, and wrong identities of registrants.

He stated that these anomalies if not resolved, would lead to political unrest, which may affect the country's democratic values.

The former President said this on Thursday at a press conference in Accra to expressed the party's dissatisfaction about irregularities at the ongoing voter exhibition exercise.

He said selected exhibition centres in the Greater Accra, Central, Ashanti, Savannah, Volta and other Regions have witnessed anomalies which needed urgent attention to rectify the problem to avoid any untoward situation.

He said some EC officials were seen on social media printing new voter's cards to individuals with duplicate ID cards numbers, without the notice of the political parties.

He said the conduct of the EC had generated anxiety from the public that the December polls would not be free and fair elections.

"These warning signs do not augur well for the country, we will resist any form of intimidation from all quarters because the sovereign power comes from the people", he said.

Mr Mahama called on the Commission to begin a regular comprehensive and transparent dialogue with the Inter Party Advisory Committee to resolve any electoral flaws ahead of the December polls.

He said over the years, the EC had had a cordial relationship with IPAC and assisted the Commission to carry out its constitutional duties and ensured general acceptance of election results.

Mr Mahama said the EC had ignored in recent times valuable advice from IPAC which had necessitated these occurrences in the electoral processes leading to the elections.

He said the party would not accept the results of a flawed election from the Commission.

He appealed to International Election Observers to focus their attention on Ghana and to monitor the country's electoral processes.

Mr Mahama appealed to Ghanaians to visit the exhibition centres stations with their ID cards and ensure that their details were accurate in the register.

He urged party's executive to suspend all campaigns and monitor the voter exhibition exercise to avoid any form of manipulations.

Reacting to the issues, the Commission in a statement on September 21, explained that during the just ended registration exercise, few centres experienced the production of duplicate ID cards which resulted from registration kits bearing the same codes.

This, according to the Commission led to the printing of Voter ID cards with the similar numbers for different persons, and that it was replacing the duplicate cards for the affected persons.

The Commission entreated political parties to visit the affected districts offices to monitor the distribution of the duplicate cards to the affected persons.