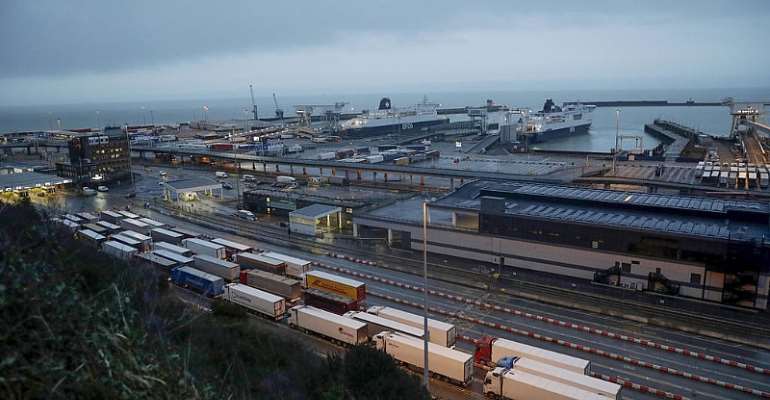 Striking workers demanding higher pay to deal with Brexit and the coronavirus have shut down the northern French port of Calais. The strike started at 8:00 am and no vessels were allowed to enter or leave the port, a major hub for cross-Channel trade, transport and tourism.

"As the largest passenger port in continental Europe, the port of Calais is simultaneously facing the Covid-19 crisis, Brexit and the migration crisis," the sector branch of the FO union said.

DFDS and P&O ferries were blocked in Calais and across the Channel in the English port of Dover.

A normal day's traffic consists of some 50 crossings.

Unions called the strike over workers' pay, which they say is below the national average for the sector, despite the particular challenges of working at Calais.

As a result of the strike on the French side, Kent's Highway Services in the UK announced that the Dover Traffic Access Protocol (TAP) scheme had been implemented on the A20 at Aycliffe because of heavy freight volumes.

At approximately 12.20pm UK time, Highways England announced that Operation Stack had been triggered on parts of the J8 and J9 highways.

Operation Stack it is a mechanism that allows UK police to park or "stack" lorries on the motorway when there is disruption to services at crossings such as the Channel Tunnel or Port of Dover.

It can be invoked in case of poor weather, industrial strikes, fire or extra security checks and border checks.

During Operation Stack, trucks are parked in two lines on each side of the carriageway, one for each direction.

France doesn't have an equivalent mechanism, but long queues of trucks formed at the emergency lanes of roads leading up to the port.

The French daily La Voix du Nord reported that some thirty migrants tried to mount trucks that were queuing up, but they were dispersed by the police.

The transport chaos that developed as a result of the Calais strike may offer a taste of thing to come when Britain formally leaves the EU trading bloc on 31 December, especially if there is no deal on the terms of the Brexit, which could see massive waiting times, checks and paperwork hamper any smooth transfer.

The coronavirus crisis might also lead to a greater work load due to health checks and quarantine regulations.

In addition, the FO pointed out that a planned extension of the port next year would raise traffic by some 30 percent.

"It is therefore completely unacceptable that with increased responsibilities the port workers are seeing their pay reduced compared to pay at the national level," it said.

DFDS have announced extra sailings between Dover and Dunkerque aimed at making up for the Calais boats that were cancelled as a result of the French strikes.