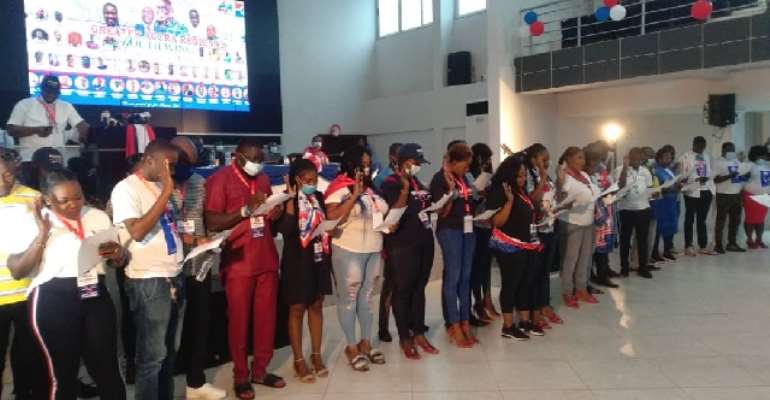 The Greater Accra Regional Youth Wing of the governing New Patriotic Party (NPP) has said it is determined to maintain and increase its parliamentary seats for the party in the December polls.

The governing party has 21 seats in parliament out of the 34 seats in the region.

The main opposition National Democratic Congress (NDC) has 13 of those seats.

With election 2020 inching closer, the youth wing said it is poised to retain the 21 and take an additional three from the NDC.

According to the party’s Ablekuma North parliamentary nominee, Sheila Bartels, the governing party's flagship programmes such as Free SHS, 1 District-1 Factory, Planting for Food and Jobs, and the employment of Ghanaians in many sectors of the economy, will attract sufficient votes in the region.

Speaking on the sidelines of the Greater Accra Regional Youth Wing/TESCON Training and Campaign launch in Accra on Thursday, 24 September 2020, Ms Bartels said: "Recent campaign promises and past achievements of the flagbearer of the NDC are woefully inadequate to overturn the superior records of President Akufo-Addo".

For his part, the Director of Operations at the Presidency who chaired the launch, Mr Lord Oblitey Commey, said: "This 2020 election can only be won if the NPP Youth Wing rises to the occasion”.

“Our youth should drive the NPP campaign with passion, loyalty; entering into homes, preaching Nana Akufo-Akufo".

Meanwhile, the National Youth Organiser of NPP, Mr Henry Nana Boakye was presented with a citation from the party’s national executives on behalf of the youth wing.

The tertiary wing of the party, TESCON and the Campaign Working Committee of Greater Accra were inaugurated.