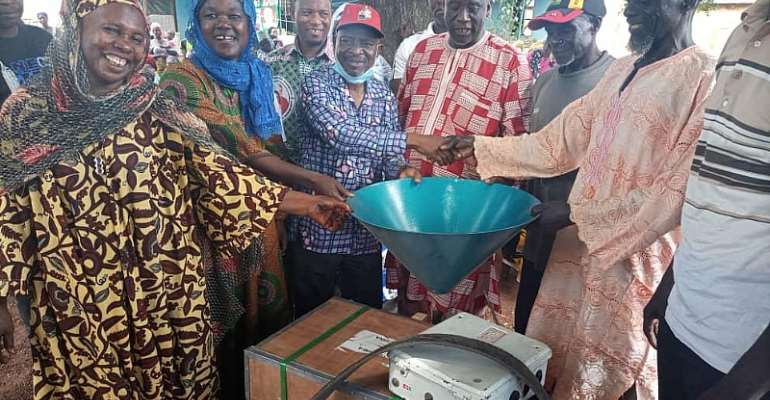 The donation was as a result of the requests made by the beneficiary communities to aid women who hitherto go to nearby areas to access corn mill services.

It will be recalled that in 2015/2016, Hon. Alhaji A.B.A Fuseini presented two modern rice mills and two shea butter extraction equipment to four zones in the constituency.

In addition to these milling machines were four FAW-Kia trucks and eight tricycles under the auspices of EDAIF.

These and many other livelihood empowerment interventions have been undertaken by Hon. A.B.A Fuseini since 2012.

In a similar gesture, the lawmaker in partnership with the Shishegu Community presented a hearse to the community.

At a ceremony in Shishegu, Chief Alhaji T.A Mahama former Headmaster of Tamale SHS now Shishegu Bonting-Naa, a subject of Shishe-Naa on behalf of the Chief and people of Shishegu expressed his appreciation for such partnership to help find solutions to their challenges.

Chief Bonting-Naa also expressed gratitude to the lawmaker for similar interventions in the Shishegu community in the area of education, electrification, empowerment among others and called on the MP to extend his attention to similar development issues within the area.

The good people of Sagnarigu on their part promised to overwhelmingly vote and retain Hon. A.B.A Fuseini as their Member of Parliament and endorse HE John Dramani Mahama as the President come December 7.