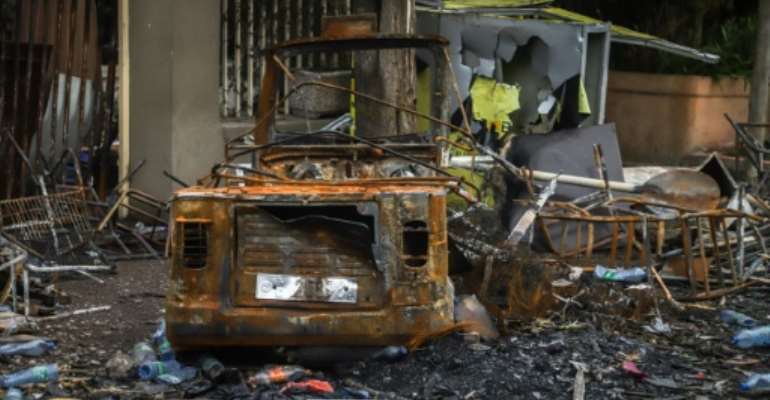 The remains of a burned-out car and building in the Oromia town of Shashamene, where violent protests erupted following the killing of singer Hachalu Hundessa. By - (AFP)

Around 2,000 people are facing charges over violence that erupted in Ethiopia after the June killing of a pop star from the Oromo ethnic group, the attorney general said Thursday, while denying that investigations were politically motivated.

More than 9,000 people including journalists and prominent opposition politicians were caught up in subsequent mass arrests that stoked criticism that Abiy, winner of last year's Nobel Peace Prize, has seized on the unrest to silence critics.

"The current figure we have is about 2,000 suspects are being charged for their participation in the violence that has taken place in Oromia regional state," Attorney General Gideon Timothewos told a press conference Thursday at Abiy's office.

Among the most high-profile opposition politicians set to stand trial is Jawar Mohammed, a former media mogul who was once considered an Abiy ally.

Jawar is accused of crimes including terrorism and incitement to violence, but on Monday he appeared in court and denounced the charges as part of a plot to sideline Abiy's opponents ahead of national elections expected next year.

Gideon on Thursday rejected any suggestion that the cases against Jawar and others were tainted by politics.

"Some of the accused are politicians but they are not being charged for their political activity," he said.

"We have to distinguish between peaceful, lawful political mobilisation and the kind of rhetoric, the kind of ultranationalist militant violent political activism, that results in deaths and injury of citizens," Gideon said.

Abiy's press secretary, Billene Seyoum, said at the same press conference that the arrests and prosecutions should not cast doubt on the credibility of the upcoming elections, which represent a major test of Abiy's commitment to democratic reforms.

"Elections will be free and fair," she said.

"The rule of law proceedings have nothing to do at all with trying to get... some prominent voices out of it."

Gideon said "more than 160" people were killed and "around 360" injured after Hachalu's killing.

Officials have previously provided death tolls as high as 239.