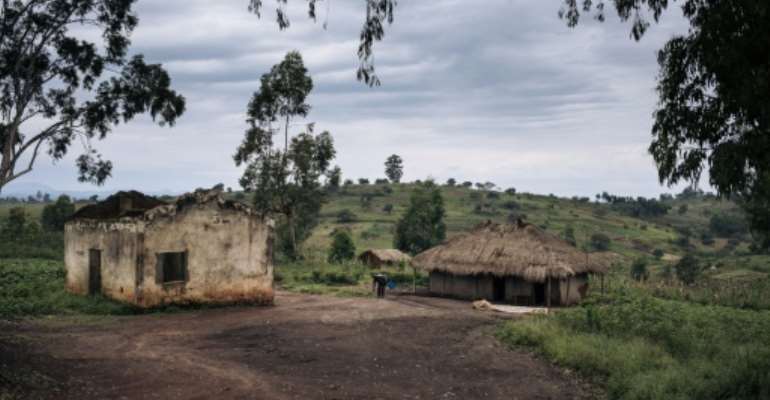 Several villages have been caught up in the crossfire. By ALEXIS HUGUET (AFP)

"My house was here," says Seraphine. "It has been destroyed."

She has returned to Dhera, a village ravaged in April in an alleged revenge operation by government troops.

Dhera lies in Ituri province, part of the vast, long-suffering east of the Democratic Republic of Congo, where the army is battling more than a hundred armed groups, from ragtag fighters to organised militias.

The fighting has many dark and brutal aspects. They include the behaviour of the armed forces, whose troops -- which include former militia fighters -- are often accused of violations of human rights in UN reports.

About two-thirds of the family homes in Dhera were burned or in ruins, an AFP journalist saw during a visit to the area with a patrol of UN peacekeepers in mid-September.

The village is near a road heading towards the border with Uganda.

It lies in territory suspected to have become both a stronghold and rear base for the dreaded Cooperative for the Development of Congo (CODECO).

This bland name masks the nature of a politicised military sect that purports to defend settled Lendu farming folk against other communities, including Hema herders who are also long established in Ituri.

A Lendu herself, Seraphine is a collateral victim of army operations against CODECO members.

In the constellation of armed groups and militia forces that constantly destabilise eastern DRC, CODECO has a special place.

When it was founded in Ituri in 1978, the movement was an initiative to encourage agriculture in a region that is also rich in gold reserves.

"More discreetly, however, CODECO has engaged in mysticism and fetishism," states a report from Pax, a Dutch non-governmental organisation working to promote peace around the world.

An AFP trip into this remote region confirmed CODECO has two faces -- one decidedly military and the other steeped in mysticism and animism.

In the village of Masumbuko, Ngadjole Ngabu, known as "the Sacrificer", presented himself as a spiritual leader in a dominant branch of CODECO -- and as wielding the power to order or prohibit attacks by fighters under his command.

In a break between a procession by child choristers and readings from the scriptures, Ngabu said he sought to defend people like Seraphine, whom he called "victims of police and military harassment (...) in the total indifference of the authorities".

"If one of us is killed, the state finds that normal," he said, citing the case of a Lendu priest, Father Florent, who was found dead in murky circumstances in June 2017.

Back in Dhera, Seraphine and her neighbours say they would prefer to do without CODECO's protection, since it exposes them to reprisals by the army.

A CODECO militiaman. The group has been blamed for hundreds of murders in Ituri. By ALEXIS HUGUET (AFP)

The armed forces attacked the village in April after the deaths of two soldiers, according to testimony by security authorities and Lendu public officials.

Inhabitants fled to the neighbouring village of Gudjo, which was raided two months later by troops seeking "attackers". Thirteen civilians were killed, including the village chief and his son.

"I was taken for an attacker," another inhabitant of Dhera told AFP. "My brother and I were tied up by the Congolese army."

"All Lendu are being treated as attackers," said a man of 35, whose house had also been burned down.

"They treat us as traitors and opponents, we who work with the government forces," a local administrative official protested.

The International Crisis Group (ICG) think tank in July said it was difficult to estimate how much support CODECO had from within the Lendu community.

It said that Lendu leaders did not support attackers and that they also condemned their assaults.

According to UN figures, some 1,000 people have been slain since a resumption of violence in December 2017 in Ituri, which had already seen conflict among community militias between 1999 and 2003 when war swept the region.

CODECO is behind most of the bloodshed today, in the eyes of the UN peacekeeping mission MONUSCO and Congolese authorities.

Map locating region of Ituri, in the east of the Democratic Republic of Congo. By Romain ALLIMANT (AFP)

The majority of victims are civilians from the Hema and Alur communities, accused by the militia of confiscating Lendu land, a perennial source of strife.

CODECO's influence over Lendu militia forces is believed to have weakened after the army killed one of its chief figures, Justin Ngudjolo, in March.

With their spiritual leader, CODECO members then went to Masumbuko to meet a delegation of onetime local warlords from the first years of the century. The latter were sent as peace envoys by President Felix Tshisekedi.

Several sources agree that the rate of massacres has decreased since this initiative.