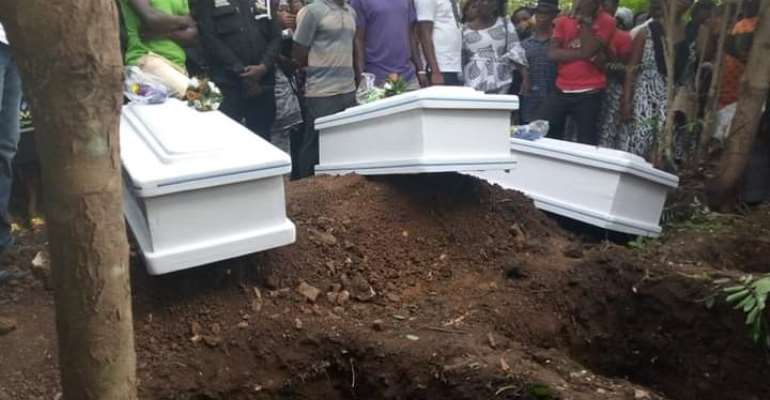 Somanya township has been thrown into a state of mourning as three children who died in a fatal accident on Saturday were buried.

Their mother who suffered a fracture injury is currently on admission at the St. Joseph Hospital receiving treatment.

The bereaved family and sympathizers could not control their tears as the children were being buried.

The deadly accident occurred at about 2:40pm in an area called Nartey right opposite the University of Environment and Sustainable Development stretch of Somanya to Accra road.

The accident involved two speeding vehicles -an Opel Astra taxi cab with registration number AS 2061-12 and a Green Hyundai H-100 mini bus with registration Number GW 5954-14 which collided head-on killing four of the occupants while 20 others were injured.

According to the Somanya Police, the Opel taxi cab was from Accra towards Somanya with eight (8) passengers onboard including children while the Hyundai H-100 minibus was speeding from the opposite direction of Somanya towards Accra with thirteen (13)passengers including children on board.

But on reaching the University portion of the road, the taxi cab allegedly veered off its lane and collided with the Hyundai H-100 minibus.