Don't Expect Me To Accept Results Of A Flawed Election, I Won't – Mahama Reiterates To EC 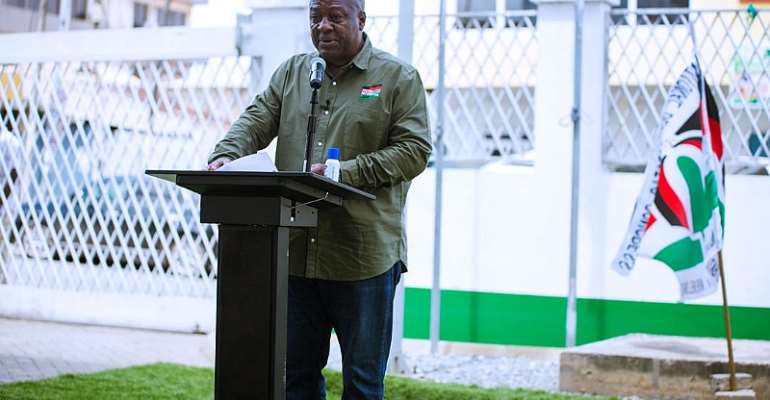 The opposition NDC has reiterated that it will not accept results of a flawed election.

The latest caution by the NDC comes after the party alleged that the EC was deliberately taking out names of its members from the newly compiled voters’ register after omissions were identified in some polling stations across the country during the ongoing exhibition exercise.

The EC has denied the allegation and subsequently extended the duration of the exercise by two-more days, to end September 27.

But flagbearer of the party John Dramani Mahama has warned the election management body that its credibility was at stake and must put in place measures to ensure the upcoming poll is fair to all stakeholders.

Even though Mr Mahama acknowledged that the NDC has exhibited restraint since the electoral process started, he stated that the party will not allow the EC usurp the people’s mandate.

Addressing the nation on Thursday September 24, Mr Mahama noted “we in the NDC have exhibited restraint at all times in this electoral process, even now we are committed to doing so. But we will not accept the result of a flawed election.”

He went on “we will certainly not look on, neither will we shirk our civic responsibility and allow the EC, whether it intends to or sheer incompetence to usurp the peoples mandate in the December 7 polls.”

“We want to see fairness, transparency, and integrity in the process leading up to the elections. The EC will take responsibility and act in good faith to resolve them,” he added.

NDC’s Manifesto Has ‘Aroused Sleepy Conscience’ Of Akufo-Add...
14 minutes ago

Odododiodio Clash Shameful; Ghana Shouldn't Burn Because Of ...
57 minutes ago