A Quick Note To Mr. Dennis - Who Claims To Be Part Of The Leadership Of Camp Liberia's Refugee Community 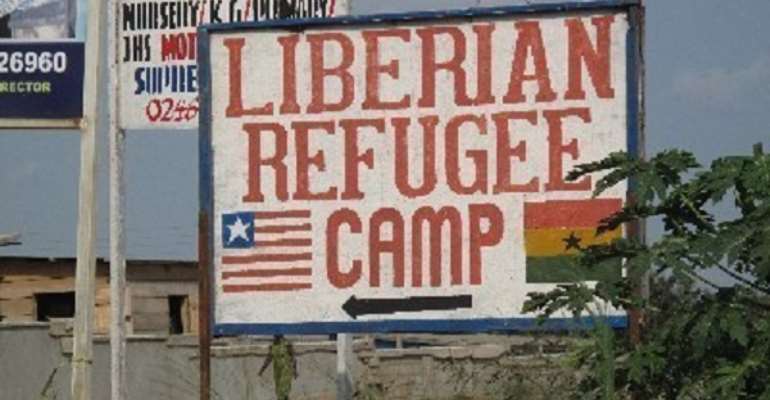 Dear Mr. Dennis,
I shall go straight to the point: No one in the so-called leaderships, of the Liberian community in the Gomoa Buduburam Camp Liberia refugee settlement area, the local offices of the Ghana Refugee Board, and the Gomoa East District Assembly's local offices in Gomoa Budumburam, can prevent me, from achieving the goal I have set for myself. Never. Full stop.

My goal, in seeking to work with Amy Peake's Loving Humanity NGO, and the Bushira Makuyi Foundation, is simply to find a creative way, to empower the poorest of the poor females, in Camp Liberia's base-of-the-pyramid demographic, to become financially-secure, and independent women, who can take care of themselves, and their offspring, as well, without being dependent on either their husbands', or their boyfriends' with whom they cohabit, through creative-thinking. Simple. Case closed.

I find the idea that there are people in Camp Liberia, apparently questioning my motivation, somehow, for that simple goal, deeply offensive. Fools.

That is why I have decided to ignore what on the ground, in Camp Liberia (according to bush-telegraph sources), is akin to a reign-of-terror, by petty-local-officialdom, which is said to be part of the callous local Mafia, which has allegedly siphoned off trillions of old Ghana cedis, of UNHCR cash, over the decades, meant for the welfare of hapless refugees. Disgraceful.

Clearly, what that means, in effect, is that the exploitation that has gone on, more or less began from day one, right from the moment when those poor fellow Africans (forced to flee their homeland, Liberia, and other sister nations that were also torn apart by brutal civil wars, such as Sierra Leone, incidentally), arrived on our shores.

The question to ponder over is: If none of the Liberian refugees have still apparently never received any post traumatic stress disorder (PTSD) counselling, since they arrived in Ghana, and subsequently, over the decades-long-time-frame that they have been here, why don't those vampire-leaders not rather focus on such vital refugee-welfare issues, if they actually cared about the well-being of those they supposedly lead? Scandalous. Monstrous. Unspeakable . Unpardonable.

Massa, get this straight: Kofi Thompson is not a con-man seeking to use Camp Liberia's poor and over-exploited refugee-community, to somehow enrich himself, wai. How absurd.

And, any of you, who has the temerity, to think that you can use that egregious-falsehood, and short-sighted daft-thinking-strategy, to label me as some crook-with-a-hidden-agenda, out to cook up a stealth-scheme to dupe poor people in Camp Liberia, is a fool and blackguard. Period.

Mr. Dennis, Kofi Thompson is not a crook, wai. Neither does he fear the wicked-and-callous-crooks, amongst the so-called community-leaderships, some of whom allegedly daily conspire to use their positions, as leaders, for personal-gain, at the expense of Camp Liberia's traumatised poor. What gall you leeches have.

For your information, according to bush-telegraph sources, there are said to be indications that some too-clever-by-half people, in Camp Liberia, are apparently suspicious about the motivation for what I am trying to do, for the poorest females in Camp Liberia, in particular, and Gomoa Buduburam, generally. Imagine that. Ebeiiii.

In light of that, I humbly suggest that you find time to read as many of my published articles, as you can find and digest. I will not meet with you, until you have done so. Ever. Sorry.

The reason for that determined-insistence, of mine, is that that will enable you to clearly understand my motivation, as a Pan-Africanist, and patriotic Ghanaian citizen-journalist (and plain-speaking-blogger), who is on the side of the ordinary people of Africa - as opposed to engaging in mercenary-toadying, serving the thieves-in-high-places, amongst the continent's vampire ruling-élites, as so many media professionals across Africa, often are, before you too insult me, by doubting my motives. What impudence. Haaba.

Finally, if you are still in doubt, then please take my advice: report your daft-suspicions about me, to the national security minister, Hon. Bryan Acheampong, for swift action to be taken to arrest and jail me for investigations to be carried out, to ascertain your worst fears, wai. What infernal cheek. Hmmm eyeasem, oooo...

Thanks - and peace and blessings to all of you who make up the sodden-so-called-leadership, of Camp Liberia's refugee community. You have finally met your match, oooo, Massa. You have trodden on grounds where even angels fear to tread. Yoooooo...