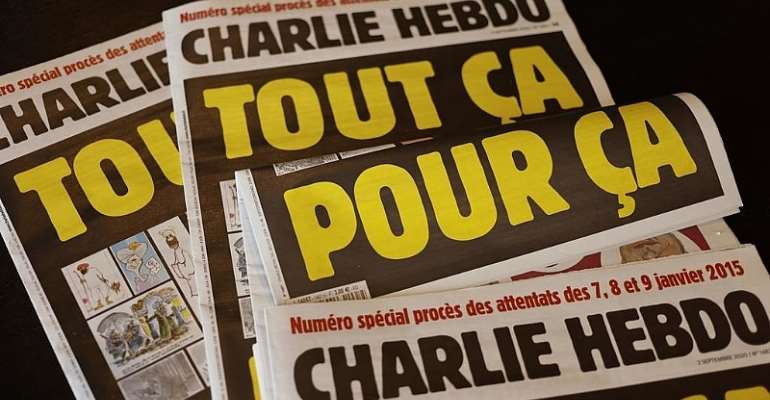 More than 100 French news outlets have published an open letter to warn against the threat to freedom of speech. It comes after the satirical magazine Charlie Hebdo, which was attacked by gunmen in 2015, received new death threats.

The magazine Charlie Hebdo republished cartoons of the Prophet Mohammed earlier this month at the start of a trial of suspects in the 2015 attack on their Paris office.

While the edition sold out in France, it provoked condemnation from several Muslim countries, and al-Qaeda militants reportedly threatened a repeat of the 2015 massacre of the magazine's staff.

On Wednesday, Charlie Hebdo published an open letter on the front page of its new edition, denouncing "new totalitarian ideologies, sometimes claiming to be inspired by religious texts".

France Médias Monde, the parent company of Radio France Internationale, France 24 and Monte Carlo Doualiya, is among the letter's signatories.

Urging people to support the magazine, the letter says: "The enemies of freedom must understand that we are all, together, their steadfast opponents, regardless of our differences of opinion or beliefs."

"Today, in 2020, some of you are being threatened with death on social networks when you expose singular opinions. Media outlets are openly targeted by international terrorist organisations. States are putting pressure on French journalists "guilty" of publishing critical articles."

The threats coincide with the trial of 14 suspected accomplices of the perpetrators of the massacres at Charlie Hebdo and a Jewish supermarket that left a total of 17 dead.

Twelve people, including some of France's most celebrated cartoonists, were killed on 7 January, 2015, when brothers Said and Cherif Kouachi went on a gun rampage at the magazine's office.

Death threats
Charlie Hebdo's head of human resources Marika Bret told Le Point magazine that police had rushed her from her home after she received death threats they judged to be credible. She told Le Point there was "crazy amount of hatred" towards the magazine.

Marika Bret, who has been living under police protection for nearly five years in the aftermath of the deadly assault on Charlie Hebdo in January 2015, said the threats were "sufficiently concrete to be taken seriously".

"I had 10 minutes to gather my things and leave my home. Ten minutes to leave behind a part of my life, that's a bit short, that's very brutal," she told weekly news magazine Le Point published Monday.

There is "a crazy amount of hatred surrounding Charlie Hebdo", Bret told Le Point, saying the forced departure from her home "translates the unprecedented level of tension that we are having to deal with".

"Charlie Hebdo is once again threatened by terrorist organisations," said editorial director Laurent Sourisseau, who was badly wounded in 2015. "Threats that constitute a real provocation in the midst of the trial of the January 2015 attacks."

"It seemed necessary to us to suggest to the media to think about the collective response," Sourisseau added.

The letter supporting Charlie Hebdo is signed by major newspapers, magazines and broadcasters, who will republish it.