Intimidating The Striking Nurses And Their Allies Is Wrong 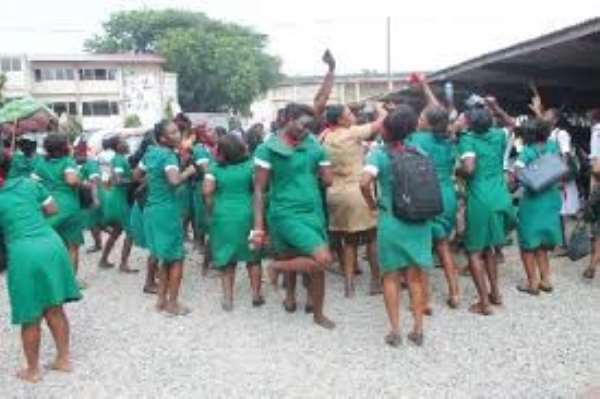 In unison with the Ghana Association of Certified Registered Anaesthetists (GACRA) and Ghana Physician Assistants Association (GPAA), the Ghana Registered Nurses and Midwives Association (GRNMA) had declared total and nationwide strike on Monday, September 21, 2020. Their members in the public sector had therefore deserted the public hospitals ever since. The strike action emanates from government’s inability to meet their required conditions of service (COS). One may assert with certainty that industrial actions or strikes and lockouts have become the language between the public sector employers and the public servants. Health workers are essential service providers per section 175 of the Labour Law, 2003 (Act 651) so naturally the employer should not toy with their COS let alone they proceeding on total strike. In this article, I will argue neutrally and place the hammer where I find the nail.

Intimidating the Nurses instead of Negotiating with them is Bad

So as indicated ut supra, public sector Nurses of all kinds, Midwives, Physician Assistants and Anaesthetists have begun a total nationwide strike since last Monday. They have stopped saving lives in the midst of the Coronavirus pandemic. Are they heartless? Methinks no. They are human too. They are human like the article 71 public officers who are paid fat salaries and ex-gratia. They save lives. They provide essential services. They deserve good COS. Matters relating to their COS should not be brushed under the carpet. President Emeritus Kufuor was bold and frank when he said government pretends to pay public servants and the latter pretend to work. But in the case of the essential service staff like Nurses, Midwives, Anaesthetists and Physician Assistants, I do not think they pretend to work. They save lives.

We have seen in the media that the Police and other authorities are intimidating the striking Nurses and their allies. Such intimidations must be condemned unhesitatingly. We should not and we cannot force the striking Nurses, Midwives, Physician Assistants and Anaesthetists back to work, using intimidation. They save lives so intimidating and forcing them back to the hospitals can have serious implications for quality patient care.

This is not the first time and it will not be the last time we are witnessing such strikes in the public health sector. We witnessed so many of such strikes before and many of them in 2016 but nobody intimidated anyone so the MOH, GHS and central government should engage the striking health workers rather than using intimidation. Intimidation will not work.

Do the Nurses Deserve what they are asking for?

It is reported widely in the media (traditional and social) that the nurses and other striking health workers are making certain demands such as:

Much as I agree that the Nurses, Midwives, Anaesthetists and Physician Assistants deserve what they are asking for, it is better they negotiate an implementation road map so that we do not overload the gun with too much gunpowder and burst the barrel of the gun in the process. That can be suicidal.

Somehow, government is to blame for these huge demands at a go by the nurses and their allies. Most often, when health workers make demands, government approves some and instructs that the demands should be factored into the categories 2 and 3 allowances payable from Internally Generated Funds (IGF). The IGF is tied to payment of NHIS claims to the hospitals and other competing overhead costs make it difficult for hospital managements to pay such decentralised and localised allowances. This is why the nurses want their demands consolidated into their salaries payable from the Controller and Accountant General’s Department. Apparently, they do not want to be “fooled”.

Even though I agree with the striking nurses and others, they should reconsider their demands because the poor patients are suffering and any of them or their relatives can become patients even while strike is in force.

Be that as it may, strikes like this should teach government a lesson that placement of article 71 workers, the Members of Parliament and Ministers on huge salaries to the neglect of other public servants is wrong. But can government afford to meet the nurses’ demands or not? Methinks it will be difficult if not impossible but the nurses must be given reasonable and realistic assurances rather than intimidations.

The National Labour Commission (NLC) ought to know that the Labour Law, 2003 (Act 651) makes provisions for legal and illegal strikes as well essential services. Where was the NLC when the striking health professionals were at the negotiation table until it got to a stalemate between them and their employers thereby leading to a total nationwide strike? Is the NLC in bed with government instead of speaking the ombudsman voice?

Placing injunction on the strike alone will not solve the problem. What will solve the problem is getting the GRNMA, GACRA and GPAA leadership back to the negotiation table with some hope to them from the employers.

The NLC should not be oblivious that health workers provide essential services so they should not have been treated unfairly to warrant a strike action. To me, the NLC has rather failed in upholding the tenets of the Labour Law proactively so they are now using a kneejerk approach in the form of injunction.

Be that as it may, the nurses and their allies (GACRA and GPAA) should also be measured and realistic in their demands should they return to the negotiation table. This is because the strike has morbidity and mortality implications for precious and innocent lives, knowing that no health worker has the power to resurrect those who may die because of the strike.

Somehow, the public sector health workers themselves are to blame for their poor and uncoordinated conditions of service. They are divided by forming fragmented and numerous professional associations that employ cynicism in their demands. Government is also happy that the public sector health workers are not united under the umbrella of one labour union.

Different health professional associations make demands by referring to what similar associations are enjoying. They undermine one another to government, each claiming to be the most important in the sector. It is shameful. In Nigeria and elsewhere, all the public sector workers are united so if it is strike they go en bloc.

The proverbial cotton thread says that it is only in unity that a stone is carried. The public sector health workers should learn a lesson from the proverbial cotton thread and get united with one negotiating voice. The Ghana Medical Association (GMA), which appears to be the most influential association in the health sector, should set the pace in placing all health workers in one labour union.

Even as news in is to the effect that the nurses have called off the strike, government should call them back to the negotiation table and should they go back, consensus should prevail over intimidation. The nurses deserve better than that. Again, the Nurses and their striking colleagues should also be considerate in their demands. I thank them sincerely for their timely call off of the strike.