Despite Anas' revelation, the court system in Ghana is still weak and Corrupt 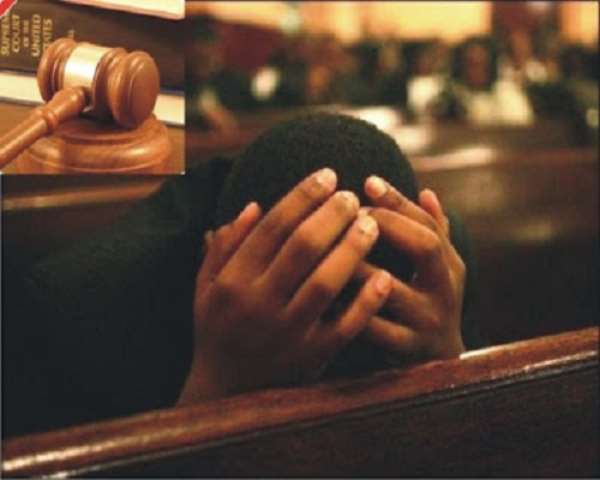 In November 2015, the under-cover agent, Anas' exposure of weak-minded and corrupt judges shook the very foundation of the judiciary. Those judges were implicated in massive bribery. Anas, an acclaimed Ghanaian investigative journalist, has repeatedly put his life on line and due to the risk he faces, he always hides his face in a mask to disguise himself. When Anas published his findings in a documentary film, seven High court judges were suspended and twenty-two judges of the lower court were also suspended. This corruption scandal is the biggest to hit Ghana's judiciary. Did the judges learn anything or has this shameful experience helped to improve judgements in Ghana's courts?

The judiciary was hard hit when very important and well-known judges were suspended. Two years after the bribery scandal, the judges clandestinely started to misbehave. Even simple cases could take between three to ten years.

Jonathan Wireko lived in his uncle's house in Ghana. It was a two-storied building. His uncle was a bank manager at a bank in Monrovia. He got a US visa but had no money to buy a ticket. Since he had all the documents of his uncle's house, he sold the house and gave the buyer photocopies of the documents and promised to provide them the receipt of payment and the original documents on the house. He gave them the keys to the house so they could move in.

Jonathan went to Accra, bought his flight ticket, and left for the US. When the real owner of the house who was in Liberia heard what his nephew had done, he rushed to Ghana. But those who had bought the house from the nephew refused him entry. He took the matter to court. The case went on for some time and on several occasions the case was either postponed or deferred. Postponements came because either deliberately or not, the bailiff sent the notification paper to a wrong lawyer's secretary instead of sending it to the defendant's lawyer to appear in court. As a result, the defendant's lawyer was absent.

The sad thing was that the man had to gallivant between Accra and Monrovia. The case took two years. It was finally ruled in favour of the defendant, despite the fact that the uncle showed proof of ownership with documents from the lands department and his insurance company.

He took the case further to the court of Appeal seeking to overturn the judgment of the lower court. The Appellant's lawyer argued that the lower court refused to accept the documents from lands department and the insurance company because all files were closed long before the two documents were brought in and therefore the documents were timed out. After investigations by the appeals court, it was concluded that the case was improperly adjudicated. His property was restored to him.

I am appealing to Ghanaians abroad never to make the mistake of having an axe to grind in a Ghanaian court because it is a complete waste of time.

It has become evident that most judges give judgements out of their own feelings and sense to victimise instead of basing judgements on the rule of law. This indiscriminate sentencing has been a major cause of worry and concern in Ghana.

A man went into a neighbour's farm and cut off a bunch of banana and decided to carry it away. He was spotted by three men and they arrested him and took him and the bunch of banana to the police station. The case was taken to court. At the court the judge asked him why he did what he did. The man answered that he was hungry and needed some food to eat. The judge was getting angry. He asked the man why he didn't pluck at most ten fingers of banana and leave the rest to hang there. Out of this uncontrollable feeling of anger he sentenced the man to seven years in prison.

Two men, Saah Sunrise, 25, and 60 year old Ibrahim Musah, were arrested in Tamale for not wearing nose masks. They were charged and bailed to appear before court on July 3. They were sentenced to 4 years in prison. Now consider the following: A former NDC member of parliament for Chiana-Paga in the Upper East Region, who also doubled as National coordinator for the defunct Ghana Youth Employment and Entrepreneurial Development Agency (GYEEDA), Hon. Abuga Pele, was slapped with six years in prison and Mr Assibit also got 12 years for swindling the government of ghs 4.1million under the pretext that they would be receiving 65 million dollars from the World bank. It turned out to be false. Imagine the amount involved and the sentences that were given? Is GHc4.1million equal to a stolen bunch of banana?

Two Canadian women, Lauren and Bailey, were abducted in Kumasi and taken to an unknown destination. This raised a lot of concern in both Ghana and Canada. The security police depending on a tip off stormed the house at Kenyase where the girls were tied in a room. The police rescued the girls and arrested eight men in the house. It was rumoured that the ring leader was a staunch member of NPP. They were arraigned before court and nothing was heard again. They are walking as free men.

A lot of noise was made about the NDC Chairman's audio leak which spelt out many deaths, kidnappings and many disastrous things which the NDC was going to use to discredit the ruling government. The Chairman was dragged to court only once and up till today, nothing concrete has been done about the case.

Indeed there are many issues and court cases which have put the judiciary to test. Cases that will take two weeks in Europe will take three to five years in Ghana's courts. Ghanaians abroad are disadvantaged because no one can leave his job for a year to fight a case in Ghana.

The wife of a Ghanaian in Switzerland changed the documents on the factory into her name. The case went on for more than three years. The man lost his job and since the lady had paid a huge bribe to the lawyer there was no way the case was going to end soon. At the end of three and a half years, the man decided not to fight the case anymore. If the judge preferred to give the factory to the woman, he should do so. Just wait and see what will happen, he told the court and left the room, leaving his lawyer very amazed. Within two weeks, the judge died, followed by his wive's lawyer. His wife became a cripple. She became well when she gave the documents back to the man. Indeed justice delayed is justice denied.

Ejura probe: Ministerial Committee presents its report to In...
37 minutes ago