How Accra tackled complex challenges in an urban slum

By Jessica Kritz - The Conversation 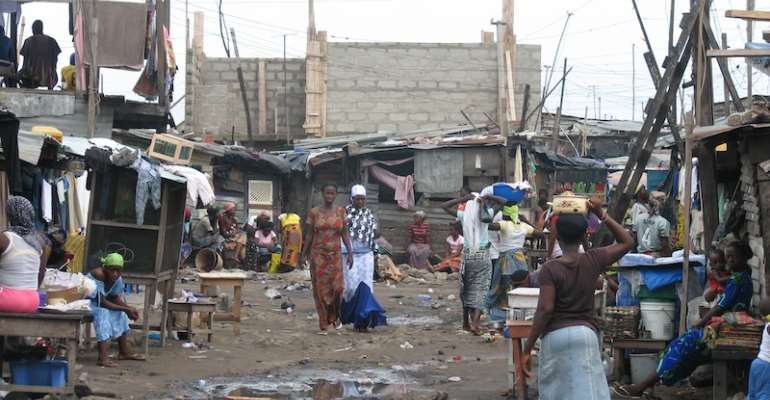 The settlement of Old Fadama has reinvented itself - Source: Wikimedia Commons

When I first heard about the community of Old Fadama in Accra, Ghana, I recognised something. A Ghanaian Catholic sister who visited the green market weekly in that neighbourhood told me about it. She worried about a community of vulnerable migrant women known as “head porters” or kayayei, who earned a pittance transporting heavy items balanced on their heads.

Old Fadama reminded me of Appalachia, the part of the US where I grew up in the late 1970s. Nearly everyone in my county lived below the poverty line. We learned to work together to solve our own problems, building bridges, repairing roads after floods, installing water and sanitation and, when necessary, even digging outhouse pits.

We wanted to see how, given the opportunity and supported with the evidence, stakeholders in a developing country would approach and resolve complex challenges.

Old Fadama was established in the 1980s by northern migrants fleeing tribal violence. It has grown steadily, with spikes from intense domestic conflict in 1994 and drought conditions in 2015. Since 2009 the population has grown from 80,000 to over 150,000. These include long-term settlers, multi-generational families, and seasonal sellers at the city's largest green market. Migrants seek health care, education, and work.

In 2015, Old Fadama had virtually no water or sanitation. Excreta were collected in plastic bags and dumped in the river that bordered the slum, heavily silting a lagoon. Residents infilled the lagoon banks with waste materials to build housing on. This led to flooding that spread faecal matter to the green market.

Outbreaks of cholera were frequent in the area, resulting in hundreds of deaths. By 2015 the slum – locally known as “Sodom and Gomorrah” – had fallen into lawlessness and was a government “ no-go area .”

Many short-term international development interventions had already failed. The stakeholders shared a different perspective that cut across technical sectors. Their goal was to address the root cause of the challenges facing the settlement.

Our process allowed government officials to interface with the elders of the 16 ethnic groups that made up Old Fadama. They identified the need to address sanitation, community violence, vulnerable populations of porters, solid waste management, and a clinic.

Every urban slum creates challenges too complex for governments to resolve when working alone. However, in cross-sector collaboration, communities and citizens articulate their needs and then partner with governments and NGOs to address these self-identified problems.

A path to success

The stakeholders identified multiple community needs, and reached consensus to focus first on installing community latrines. As one community member said, “cholera is killing us today.”

We convinced city authorities to grant permits for the latrines, not an easy thing since it involved changing policy. As local sanitation businesses, private sector companies in the business of providing public sanitation facilities in Accra, learned of our project, they saw it as workable and facilitated the policy change themselves.

On their own initiative and with their own resources, these businesses installed the first new public latrines and bathhouses in Old Fadama. All of our stakeholders contributed resources – enough that our sanitation project came in under budget. This early, visible success convinced people we were on to something, and it freed our stakeholders to address their next priorities.

Next the stakeholders worked together to scale up the participatory action research intervention. We applied it to a new challenge, head porters. Head porterage is a major form of transport of goods in Ghana. It is practised by young women and teenagers who are mostly migrants from the northern region of the country.

The research team used observation and continuous data collection and conducted interviews and focus groups. Strategies and projects were updated as new stakeholders joined the collaboration.

This process resulted in a programme of interventions to address the root causes of the challenges facing the kayayei. They included health screening, vaccination, school enrolment, microfinance and skills development.

The stakeholders invited clinic staff to be partners. The clinic bought vaccines at a discounted rate. Nurses from the Catholic Health Guild provided volunteer medical services. The National AIDS Control and Tuberculosis Control Programmes saw an opportunity to provide services to a population they had been unable to reach and shared some costs.

In this way, the collaboration expanded the number of beneficiaries from 300 to 1,534 head porters. The National Health Insurance Scheme was similarly invited to get involved and met some costs. As a result, instead of 300, 1,789 indigent kayayei were enrolled in national health insurance in three locations – Old Fadama, Madina, and Ashanti Region. Now, in all, more than 8,000 head porters have received essential services through this project.

No one sector – including government – can address these kinds of complex development challenges. Complex challenges are largely social, and affect many people, systems, and sectors. The challenges can seem difficult or impossible to resolve, and typical top-down intervention strategies are not sufficient. Incorporating multiple stakeholders and viewpoints is necessary to create effective solutions.

Our intervention method provides developing-country governments with a low-cost, locally designed process that dramatically improves participation and results in projects that impact the public good. As our evidence base develops, it is clear that this approach is working.

The national government is poised to significantly expand the intervention on new complex challenges throughout the country. From a research perspective, it will be interesting to see if this approach works as well as the locally driven approach of the first five years of the project.

Jessica Kritz receives funding from the Conrad N. Hilton Foundation for the project in Accra described in this article.