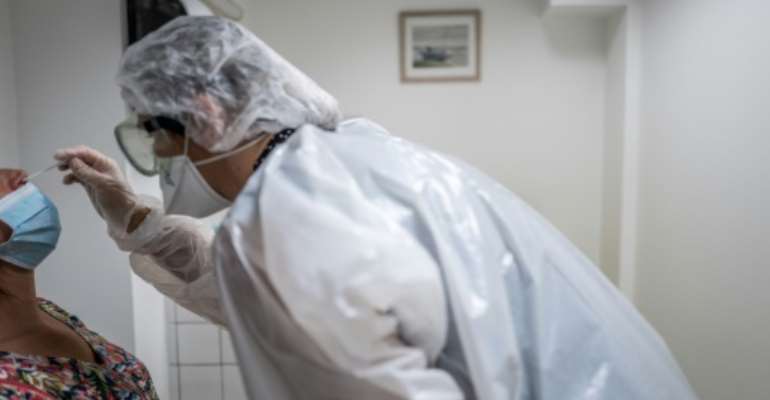 French officials are looking to speed up testing as they battle against rising infections. By JEFF PACHOUD (AFP)

Europe surged past five million cases of the new coronavirus on Wednesday as France and Spain prepared tighter restrictions in an attempt to curb rising levels of infections in their capital cities.

Worldwide nearly 32 million people have been infected and more than 971,000 have died since the virus emerged in the central Chinese city of Wuhan in late 2019 and spread across the globe.

More than half of Europe's infections have been recorded in Russia, followed by Spain, France and the United Kingdom.

The 380,000 cases reported in the past week represent the highest number in the region since the start of the pandemic.

The French government was preparing on Wednesday to announce stricter anti-virus measures for Paris, sources told AFP, as national infections have rocketed since lockdown was lifted -- sometimes surging past 10,000 a day.

President Emmanuel Macron had said new curbs would be announced on Wednesday and sources said they could include a ban on alcohol sales after 8:00 pm and restrictions on social gatherings, as well as speeded up testing.

"We are calling on people to be vigilant, we will have to live with this virus for a while," said Anne Souyris, deputy Paris mayor. "The object is to protect yourself while shaping a social life."

Britain has already announced fresh steps to try to allay the rising toll.

"To help contain the virus, office workers who can work effectively from home should do so," the government said on Tuesday, despite fears of a devastating economic impact.

Toll of coronavirus infections and deaths worldwide and in worst-affected countries, as of September 23 at 1100 GMT. By (AFP)

New rules come into force for pubs and other hospitality venues on Thursday, forcing them to close early, and plans to allow fans back into sporting events have been ditched.

British Prime Minister Boris Johnson warned the new restrictions could last up to six months and called for a collective effort to "get through this winter together".

The World Health Organization reported late on Monday that almost two million infections were recorded around the globe in the week to September 20.

The United States has passed 200,000 deaths, the world's highest toll, with Brazil, India and Mexico the next most severely affected countries.

US President Donald Trump has lambasted China over the virus. By MANDEL NGAN (AFP)

The world's most powerful nation hit the figure just 41 days before a presidential election.

US President Donald Trump -- who faces a tough re-election fight and is trailing Democrat Joe Biden in the polls -- said the 200,000 milestone was "a shame" and deflected blame on to China.

Trump used a video address to the annual United Nations General Assembly to attack Beijing for not stopping the spread of what he called the "China virus".

The pandemic is taking a heavier toll on employment than previously feared, the United Nations says, with hundreds of millions of jobs lost. By VALERIE MACON (AFP)

Trump has repeatedly played down the seriousness of the coronavirus crisis.

The pandemic is taking a heavier toll on employment than previously feared, the United Nations said on Wednesday, with hundreds of millions of jobs lost and workers suffering a "massive" drop in earnings.

"The impact has been catastrophic," ILO chief Guy Ryder told reporters in a virtual briefing.

In a rare glimmer of hope, Saudi Arabia announced that it would gradually resume the year-round umrah pilgrimage for Muslims from October 4.

The kingdom had suspended the umrah in March and later scaled back the annual hajj in a blow to millions of Muslim pilgrims around the world.