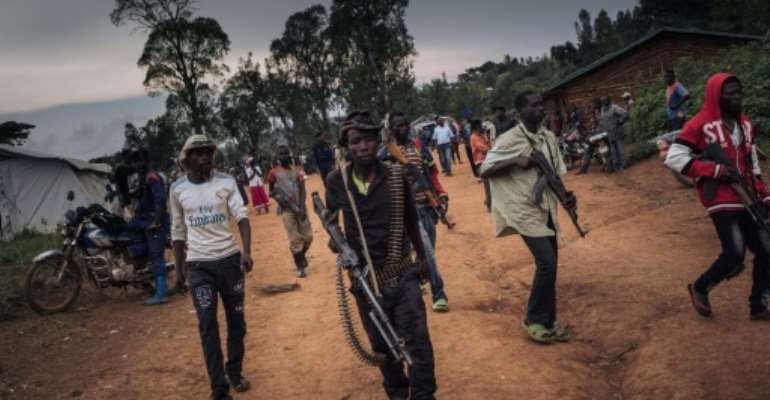 Lendu militiamen at a meeting with former warlords in the village of Wadda. By ALEXIS HUGUET (AFP)

"I call on you to prefer peace. I speak as someone who has spent 15 years in prison," says Floribert Ndjabu, a former warlord who has come to urge the men of a notorious armed group in northeast DR Congo to give up violence.

At his side is Germain Katanga, sentenced in 2014 by the International Criminal Court (ICC) for war crimes.

Katanga gives an approving nod as Ndjabu makes his pitch -- but at the same time, he keeps a watchful eye on the militiamen in front of him, with their heavy weapons, ammunition, spears, knives and fetishes.

"They aren't choirboys," says Katanga, an expert in such matters.

The pair, released from jail in January, are among half a dozen former rebels sent by President Felix Tshisekedi as peace envoys to Ituri -- the blood-stained province where they themselves once helped sow mayhem.

Their goal: to disarm the men of CODECO -- the Cooperation for the Development of Congo, blamed for the massacre of hundreds of civilians since December 2017.

A CODECO commander in Wadda village meets a delegation of former warlords sent to promote peace in volatile Ituri. By ALEXIS HUGUET (AFP)

CODECO is a political-military sect that claims to defend the Lendu, a local ethnic group who are mainly sedentary farmers.

Most of the victims have been herders and traders from their traditional rivals, the Hema, according to a UN report that says a possible "crime against humanity" has been committed.

Escorted by the army, the former warlords are heading out today from the provincial capital Bunia to the territory of Djugu, the epicentre of the latest violence.

Dozens of armed men emerge from the bush as their convoy nears.

Ndjabu, who heads the delegation, walks towards the militiamen, instructing them: "Get into the big truck at the rear."

Ituri is one of several provinces in eastern DR Congo where violence is endemic. By Romain ALLIMANT (AFP)

"Yes, president," they reply -- a nod to his status as president of the Nationalist and Integrationist Front (FNI), an armed political group that was active in the so-called First Ituri War between the Hema and Lendu in 1999-2003.

He was prosecuted, but never convicted, for allegedly ordering the murder of nine UN Bangladeshi peacekeepers in 2005.

By late afternoon, the convoy, with the militiamen onboard, arrives at the village of Masumbuko.

Among the armed group are 20 children parading in white shirts, who clearly have been inducted into CODECO ranks.

It is the following day when talks start in earnest, after the reading of biblical tests beneath a leaden sun. "Aggressors, listen to the voice of Jesus," the militiamen sing.

The ex-warlords warm to their theme, arguing that CODECO should trust the authorities to resolve differences.

"The head of state has sent us here to talk to you in order to end hostilities," says Ndjabu.

"I understand your frustration, but you should not turn the territory upside down -- you have to let the state and the authorities do their work," says Katanga.

"We are fighting the Congolese army and police (in protest at) the arbitrary arrests and detention of our people," he says, accusing the Hema of colluding "with the military" to track down Lendu fighters.

"Get it out of your heads that the Hema are your enemies or that they are evil. I am Lendu like you, but I stayed the night with the Hema. We are all brothers," retorts Ndjabu.

The talks wind up.

"We've reached an agreement. As soon as the president responds to their (request) for integration into the army or police force, everthing will be fine," predicts Katanga.

Katanga, a former commander of the armed group FRPI (Patriotic Resistance Force of Ituri), is dressed in military uniform with the rank of general.

"I came here with a clear message for them -- if you see me in military uniform, with this grade, it's because I accepted the (peace) process."

'Not choirboys': A militiaman stands guard during talks with ex-warlords in the village of Wadda. By ALEXIS HUGUET (AFP)

But AFP reporters who recently asked local people at various locations in Ituri say the level of violence has fallen back since Tshisekedi's envoys arrived.

According to the UN, more than a thousand civilians have been killed since December 2017, while the International Crisis Group (ICG) says half a million people have fled their homes. Lendu civilians also say that they have been victims of military reprisals.

Integrating miltiamen into the security forces, providing them with status and a career path, is a time-honoured strategy in many troubled African countries.

Experts, however, caution that such schemes also require long-term commitment, including punishment of those guilty of major crimes.

As the delegation leaves, excited militiamen try to block the convoy, forcing the envoys to carry on talking.

Nightfall: The convoy returns to Bunia after making its pitch for peace. By ALEXIS HUGUET (AFP)

Eventually, the convoy leaves at sundown.

As it nears Bunia, automatic gunfire of unknown origin erupts in the distance.

Katanga, his men and the army escort reach instinctively for their weapons.

The emergency passes, and the convoy continues at speed to Bunia as the night gathers.

Your independence will be respected – Akufo-Addo assures new...
9 minutes ago

He has the capacity, intellectual strength to succeed – Akuf...
14 minutes ago