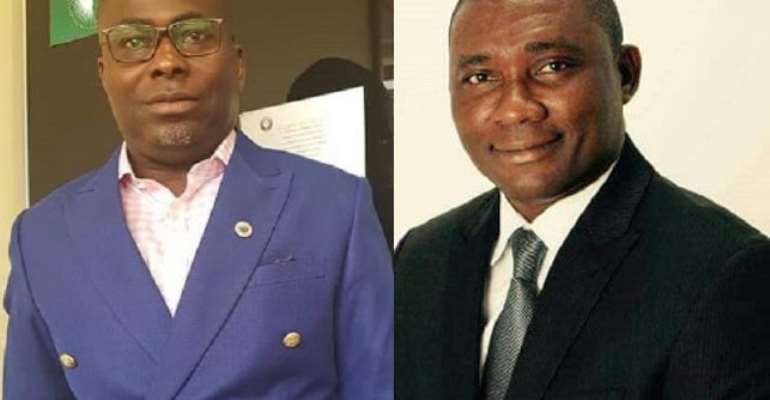 The Western Regional Secretary of the ruling New Patriotic Party (NPP), who doubles as a presidential staffer, Charles Bissue, and the NPP Member of Parliament (MP) for Tarkwa-Nsuaem in the region, George Mireku Duker, on Monday engaged in fisticuffs in the presence of the National Campaign Manager of the party, Peter Mac Manu.

In the process, Mr. Bissue was reported to have 'chewed' the middle finger of the right hand of the MP.

The incident happened during a meeting involving some national officers, regional executives of the NPP as well as some metropolitan, municipal and district chief executives, MPs and parliamentary candidates in the region.

According to sources, the meeting was among other things to discuss some challenges that could impede a resounding victory of the party in the respective constituencies in the region.

DAILY GUIDE learnt that the constituency executives were called one after the other to present their reports and the Tarkwa-Nsuaem Constituency, led by the MP, was the first to give its report.

In the process, Mr. Duker was alleged to have accused Mr. Bissue for supporting an independent candidate who was disqualified by the party during the vetting process in the area against him (Duker).

Later, when Mr. Bissue was also called to react, he allegedly rushed on Mr. Duker and gave the MP a blow.

Mr. Duker also reportedly replied with a blow but the middle of his right hand went into the mouth of Mr. Bissue who allegedly 'chewed' the finger.

When DAILY GUIDE called Mr. Duker, he confirmed the incident and said it happened at a meeting which had Peter Mac Manu and Lord Commey present.

He explained that prior to the meeting, about three weeks ago, he complained to the regional executives about the fact that Mr. Bissue had been supporting an independent candidate in the Tarkwa-Nsuaem Constituency against him and had said he (Bissue) should be talked to.

According to Mr. Duker, the executives allegedly did nothing about the issue he raised and so when he led the constituency to give its report, he decided to use the opportunity to complain again since some national officers were around.

“So yesterday at the meeting, I made the same complain that there is an independent candidate in Tarkwa who is being supported by some regional executives so we should trash the issue here. After my presentation, I went to sit down,” he recounted.

“But before the meeting came to an end, Lord Commey asked Bissue to react to the issue I raised in three minutes. Bissue went for the microphone and said I used to be his friend but I visited him at his office one day and told him that he should not believe the President and allow people to do galamsey or illegal mining,” Mr. Duker alleged.

Mr. Duker said “those present were all surprised at the comment from Mr. Bissue because he was pitting him against the President and so Lord Commey went for the microphone and said 'this is not the issue we want you to discuss'.”

Mr. Duker said Mr. Bissue was asked to sit down and that instead of going to sit on his chair, he was going to where he (Duker) was sitting fuming and threatening to beat him (Diker).

“He was coming to me as he shouted, 'I will beat you!' So my chairman was even asking me to get up because Bissue was coming to me. Lo and behold! Bissue came to me and threw a blow at me and in defence I also threw one at him but my finger went into his mouth and he chewed it.

“I had a deep cut at the middle finger of my right hand. I later went to the Jemimah Hospital for some treatment,” Mr. Duker said.

The Assistant Constituency Secretary of the NPP at Tarkwa Nsuaem, Gomashie Edem Wisdom, who corroborated the story, mentioned that the NPP activists in the constituency had even planned to demonstrate against Charles Bissue for supporting the independent candidate against Duker.

When DAILY GUIDE called Mr. Bissue for his side of the story, he said he had not bitten or chewed the finger of anyone.