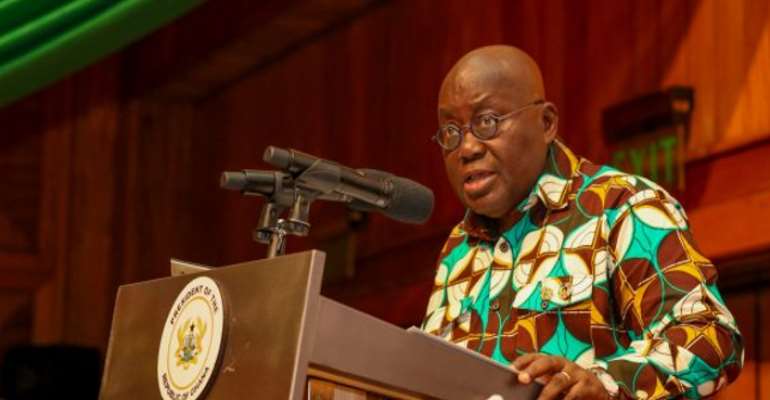 His Excellency Nana Addo Dankwa Akuffo-Addo has paid a working visit to the Tano South Municipality to interact with the chiefs and people of Techimantia.

Inspecting projects in the said community, the President of the Republic cut sod to commence construction work on Bechem-Techimantia-Akomadan road.

According to him, since Ahafo Region produces more foodstuffs to feed the nation, there is a need for him to tarre the said road to boost businesses in the Municipality and the country as a whole.

Nana Addo Dankwa Akuffo-Addo assured the chiefs that he and his government would do all it takes to ensure peace prevails before, during and after the 2020 general elections and urged the teaming youth not to also allowed themselves to engage in election violence by politicians but rather the youth should consider the massive achievements of the NPP government and vote to return the flagbearer of the New Patriotic Party to power.

The Minister of roads and highways, Mr. Kwasi Amoako Atta indicated that Bechem-Techimantia-Akomadan road is seen as one of the major roads which link Bono East Region and Ashanti Region and hinted that the road when completed would address the road network issues confronting the Municipality.

Mr Amoako said 40.4mk road awarded on contract by government would be completed in the next 24 months and however said the project would cost 50million Euros.

Nana Ampong Kromantang who welcomed the president and his entourage said the residents of the Techimantia have admired the performance of the NPP governments under the leadership of Nana Addo Dankwa Akuffo-Addo especially the free SHS Policy.

He used the occasion to inform President to provide teachers’ bungalow, pick up, boys’ dormitory, and bus for the Samuel Oto SHS to enable management of the school to effectively run the school.