US seeks breakthrough on Sudan before election 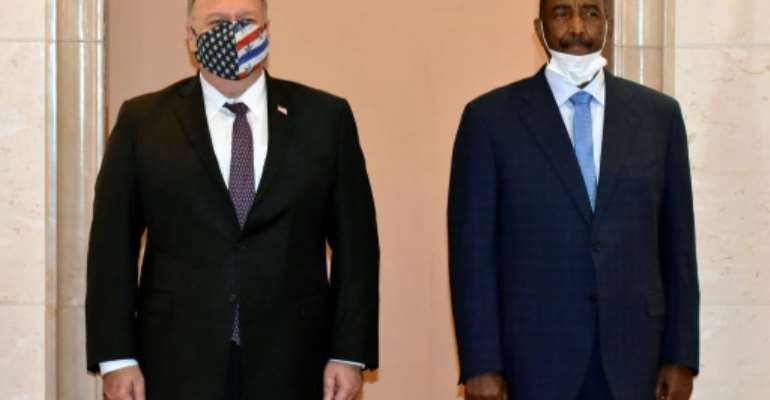 US Secretary of State Mike Pompeo poses for a picture with Sudan's top general Abdel Fattah al-Burhan in Khartoum on an August 2020 visit. By - (AFP/File)

With weeks to go before US elections, Secretary of State Mike Pompeo is racing to make a breakthrough with Sudan that he hopes could also benefit Israel.

Sudan's new civilian-led government is urgently seeking to be removed from the US blacklist of state sponsors of terrorism, and is seen by Washington as open to becoming the latest Arab state to recognize Israel -- a major cause for President Donald Trump's electoral base.

"The United States has a once-in-a-generation opportunity to ensure that compensation is finally provided to victims of the 1998 Al-Qaeda-backed terrorist attacks on the US embassies in Kenya and Tanzania," Pompeo wrote in a letter to senators that was confirmed by congressional sources.

"We also have a unique and narrow window to support the civilian-led transitional government in Sudan that has finally rid itself of the Islamist dictatorship that previously led that country."

Survivors of the 1998 bombing of the US embassy in Nairobi embrace in 2018 as they stand beside a plaque bearing the names of those killed. By TONY KARUMBA (AFP/File)

Sudan is one of four nations listed as a state sponsor of terrorism by the United States, severely impeding investment as businesses worry of legal risks in dealing with the country.

The designation dates back to 1993 when then strongman Omar al-Bashir welcomed Islamists including Osama bin Laden, the founder of Al-Qaeda, which carried out the embassy attacks that claimed more than 200 lives.

Washington had been gradually reconciling with Bashir, who agreed to independence for mostly Christian South Sudan.

But Sudan was transformed last year when Bashir was deposed following a wave of youth-led protests. British-educated economist Abdalla Hamdok has become the new prime minister with a reformist mandate in a transitional arrangement with the military.

Sudan's delisting has been held up by a dispute over a package of some $335 million that Khartoum would pay as compensation to victims' families and survivors of the embassy attacks.

Completing a compensation package "is one of the highest priorities for the Department of State," a spokesperson said.

Sudanese Prime Minister Abdalla Hamdok on a December 2019 visit to Washington as he seeks to repair relations. By JIM WATSON (AFP/File)

In his letter, Pompeo said it was "very likely" that an agreement on claims and on delisting Sudan from the terror blacklist would be completed by the end of October -- days before the November 3 election.

Senate Democrats are divided in part because the draft package would provide more money to US citizens than Africans, who made up the bulk of the victims -- an arrangement some call discriminatory but others say is realistic and in keeping with precedent.

Some lawmakers also want further discussion on compensation for other attacks by Al-Qaeda, notably the 2000 bombing of the USS Cole off Yemen.

Why the sudden push by Pompeo, who in his more than two years as America's top diplomat has rarely seemed preoccupied by Africa?

The United Arab Emirates and Bahrain last month recognized Israel, a coup for the Jewish state and a signature foreign policy win for Trump.

Pompeo briefly stopped in Khartoum in late August in the first visit there by a US secretary of state in 15 years.

Hamdok demurred in his meeting with Pompeo, saying that his transitional government, which is set to rule until 2022 elections, did not have a mandate to normalize relations with Israel -- in what would be a major about-face for a country until recently considered Islamist-run.

But some observers believe there can still be forward movement on relations with Israel, especially with the prospect of removal from the terror blacklist.

JHS graduate appeals for $45,000 to undergo kidney surgery
34 minutes ago