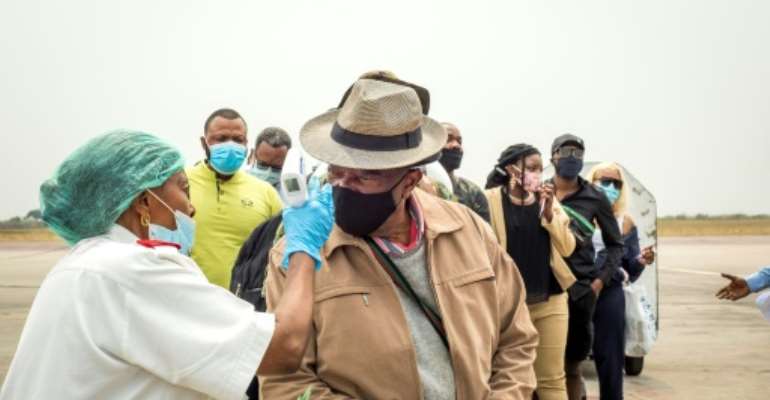 A first responder checks the temperatures of passengers at the Kinshasa airport in August 2020. By Arsene MPIANA (AFP/File)

The leader of the Democratic Republic of Congo appealed Tuesday before the UN General Assembly for debt relief for developing countries to help them cope with the pandemic.

"In order to help developing countries exit the crisis and fare better after Covid-19, the international community's efforts must include debt cancellation and other relief so they can better recover," President Felix Tshisekedi said.

The Group of 20 major economies and the International Monetary Fund have already agreed on measures including relieving debt or suspending payments as poor nations prioritize the response to the pandemic.

But Tshisekedi, in a video address to the annual summit, called on the international community to "take other decisions with a view to complete cancellation."

"All measures of support or additional funding for development countries should be without any conditions," he said.

He also called for a boosting of technical assistance "to halt and stop a disease that is our common enemy."

The Democratic Republic of Congo is one of the world's poorest nations but international observers have found guarded hope since the December 2018 election of Tshisekedi.

His succession from Joseph Kabila marked the first peaceful transition of power since the former Zaire's independence from Belgium six decades earlier.