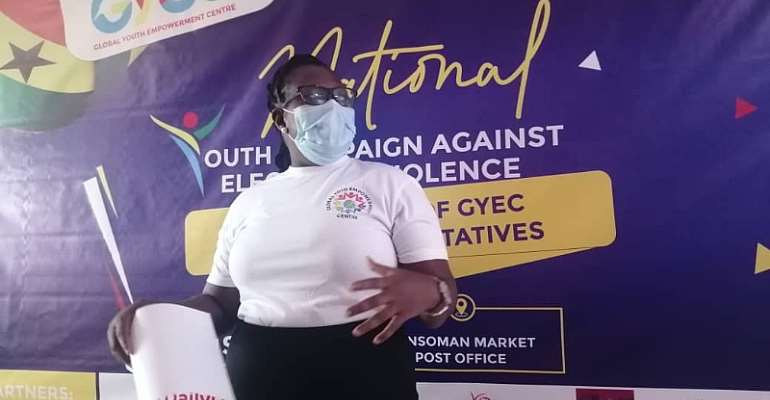 A national youth campaign against electoral violence has been launched in Accra with a call on the Electoral Commission to create a level playing field for all contesting candidates to help ensure violence-free, fair and transparent elections on December 7.

The campaign is the initiative of the Global Youth Empowerment Centre, (GYEC), a global youth movement with more than forty thousand members across the world.

The main goal of the campaign is to increase public awareness, especially among the youth to ensure peaceful, free, fair and transparent general elections in Ghana on 7th December 2020.

Launching the campaign, the Global Director of Operations of GYEC, Rhoda Duku, said in Africa, Ghana is hyped as a model of democracy and good governance. Characterizing this enviable feat since the resumption of multi-party democracy in 1992, is a record of seven successive and generally peaceful elections that have culminated into three successful transfers of power from one party to another.

According to her, none of the seven presidential and general elections, by-elections and re-runs were without violence, with the level of violence intensifying as electoral and political competition intensified with each election.

However, beneath these positive credentials are undercurrents of recurring low intensity electoral violence that has virtually marred every election cycle, although this has not blown out into a civil war as exemplified elsewhere on the continent.

According to her, the recent case of electoral violence during the Ayawaso West Wuogon (AWW) Constituency by-election in January 31, 2019, and the recent EC’s registration exercise in which there were shooting incidents and a dozen persons were injured in clashes between supporters of the opposition and the ruling parties must be concerns to all

Political vigilante groups with affiliation to the two leading political parties, the National Democratic Congress (NDC) and the New Patriotic Party (NPP) have been at the forefront of unleashing torrents of violence during elections with the aim of undermining opponents, in either inter-party or intra-party contests and events, in order to safeguard the electoral fortunes of their parties.

Ahead of the 2020 election therefore, the country has had to grapple with not only how to deal with microeconomic issues in order to avoid fiscal overruns risk but also with how to contain potential widespread electoral violence that have been sustained by impunity.

This, she noted, called for interventions to prevent and/or mitigate electoral violence including a range of peace messaging, stakeholder fora and grassroots peace advocacy by civil society groups. It was based on this premise that GYEC has launched a campaign against electoral violence.

The campaign, she noted, will reach out to over one million young people and women voters with a message of peace through public awareness creation to ensure violence-free election during and after the December 7th general elections.

Madam Duku appealed to all political parties especially the two major political parties, NPP and NDC to eschew provocative utterances, personality attacks and tribal statements that could plug the country into political turmoil.

The Country Head of the Global Youth Empowerment Centre Ghana, Raphael Godlove Ahenu, in a statement, urged the youth not to allow themselves to be used by selfish politicians to foment trouble.

He said the capacity of 2500 youth will be built as Peace Ambassadors in election hotspot communities to create a crop of youthful persons who are interested in peaceful outcomes in their communities instead of being used as tools to perpetrate electoral violence.

Ejura probe: Ministerial Committee presents its report to In...
8 minutes ago