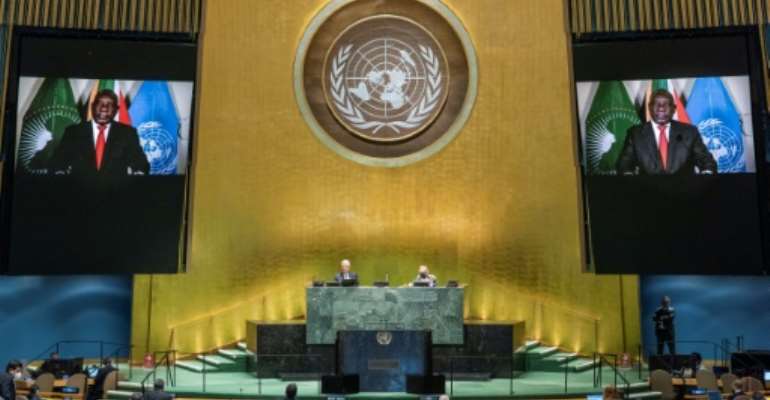 South African President Cyril Ramaphosa on Tuesday urged greater African representation at the UN Security Council as well as a stimulus package for the continent as it confronts Covid-19.

Ramaphosa, who holds the rotating leadership of the continental body, the African Union, made the call in a remote speech to the United Nations General Assembly.

"The current composition of the Security Council does not reflect the world in which we live," Ramaphosa said by video.

"We repeat our call for greater representation of African countries on the Security Council, and that this be taken up with urgency at the intergovernmental negotiations."

"It is only through a reformed and inclusive UN Security Council that we will be able to collectively resolve some of the world's most protracted conflicts," he said.

South Africa is serving its second year as an elected non-permanent member of the Security Council.

It has long pressed for reform of the Security Council, which has five veto-wielding permanent members -- Britain, China, France, Russia and the United States.

"Without comprehensive reforms, the UN faces a crisis of confidence," he said.

His country -- the worst affected by the coronavirus on the continent, recording more than 660,000 cases and nearly 16,000 deaths -- is faced with scandals over corruption and missing funds earmarked for the pandemic.

"We must deal decisively with the rot of corruption that is robbing our people of the opportunities and services that are their right," said Ramaphosa, who won last year's elections on promises to fight graft.

He also called on the UN to curb racial prejudice and intolerance.

"As a country that has known too well the anguish of institutionalized racism, South Africa supports the demands for swift action against racism, whether committed by individuals, companies, officials or a state," he said.