Insurance For Cocoa Farmers – An Idea Whose Time Has Come 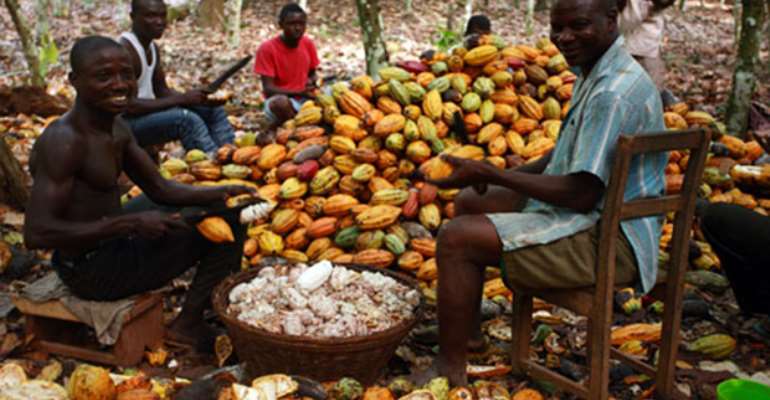 My father was a cocoa farmer all his life. He helped his father grow cocoa and then when he became a man, he grew his own. I helped him do that, as a child.

The reason why the cocoa farms were sited near different rivers was based on common sense as much as “science”: sometimes, one part of a forest would suffer from a disease (usually fungal) or even drought, while others within a radius of only about ten miles or so, would be faring much better. If you placed all your raw cocoa seeds in one area, therefore (so to speak) you might come a cropper!

How did people whom we modern know-alls would arrogantly classify as “illiterate” gather their amazing know-how? They watched what happened when they planted things, and also experimented with what they planted and how. They were wonderful.

Of course, there were times when Nature defeated them. For instance, there was one planting year (I believe it was 1982/83) when a drought descended upon our forests with such ferocity that naturally-occurring fires destroyed many of our cocoa farms.

One pilot friend of mine who flew to plot the geographical lines of the fires from the air, told me that he was completely astounded by the ferocity of the fires he saw below him: “I mean, the fire was making its way across roads and rivers!” he said.

At such times, all the hard work the farmers had put into their work went up in flames – literally. Hard work? Yes; they worked hard to ensure that the seeds they had planted did not amount to more than two per hole (as each seedling would choke the other to death if they were too close together.)

Indeed, transferring seedlings from where they had sprouted to new places to plant them, took most of a cocoa farmers' time. Next, they had to inspect the planted seedlings regularly, because the seedlings can be attacked by squirrels, field-mice bush-rats and other rodents. Apparently, rodents have a taste for cocoa seedlings!

Anyway, the cocoa farmers of my father's day were completely at the mercy of Nature. (Those were the pre-DDT days.) But despite their enormous difficulties, the farmers were so assiduous that Ghana became the largest producer of cocoa in the world.

Our dollar earnings for the Sterling Area (controlled by Britain) and our surpluses of foreign exchange – invested for us by the British “Crown Agents” (no doubt for a “commission” charged at a rate dictated by the British) – enabled us to build up “reserves” amounting to about $250 million by the time we obtained independence in 1957.

During the struggle for independence, the cocoa farmers had been told that when independence was obtained, it would be the state of Ghana that would decide how much would be paid to them when they sold their cocoa, and not the British. But the CPP Government continuedthe practice of keeping the farmers out of the pricing system of the crop.

The Cocoa Marketing Board and its offshoot, the Cocoa Purchasing Company, remained the price-masters in the industry, incurring enormous overheads in respect of their operations, to the resentment of the farmers.

In other words, just as Ghana has had a perpetually unfair deal from chocolate manufacturers (whose cartel controls the international cocoa market and decides how much should be paid for cocoa exported to them) so has Ghana's own marketing system denied the cocoa farmers the right to have a say in the price paid to them.

The farmers have been moaning about unfair treatment for years, but no Government wants to disturb the inherited relationship between government and farmers, in case it prevents the foreign exchange earnings from cocoa exports from going directly to the Government.

Pending a rearrangement of the relationship between Government and farmers, , the COCOBOD does try to ease some of the hardships of the farmers, with innovations here and there. It supplies spraying machines and insecticides (against pests); as well as fertilizer, to the farmers at subsidised prices. Of course, the farmers would much rather be paid the world market price and be left to purchase their needs themselves – as happens in most farming communities the world over.

So, It is therefore with mixed feelings that I, as the son of a cocoa farmer, read the statement recently made by the Chief Executive Officer of the COCOBOD, Mr Joseph Boahen Aidoo, that “a cocoa farmers' pension scheme is to be set up for all cocoa farmers”.

QUOTE: “Speaking to cocoa farmers, Mr Aidoo stated that the COCOBOD is working closely with the National Pension Regulatory Authority (NPRA) to put in place, the necessary measures to attend to the pension needs of cocoa farmers. Let me assure my cherished farmers that we are almost at the completion stage of our discussions [and that] very soon, you will all have a befitting pension scheme”, Mr Aidoo said.” UNQUOTE

The introduction of a pension scheme for cocoa farmers would be a great boon to them. It is sad to see old cocoa farmers unable to tend their farms any longer and handing the farms over to “hirelings” not all of whom deal honestly with the farmers. Meanwhile, the farmers, having used part of their earlier earnings to educate their sons, must depend on such “hirelings” or else abandon their cocoa farms to ruin. For few of the educated offspring of farmers show any inclination to continue with the work done by their fathers. A good pension would also, above all, enable the old folks to enjoy life without the myriad hardships brought about by poverty.

I began this article by stating that I am the son of a cocoa farmer. I can also tell you that one of the saddest moments of my life was when I heard abut the passing away of my old man, when I was abroad.

Would I have been able to add a few more years to his life if I had been here when he became sick?

I had done that once before – when I defied my older relatives and decided that contrary to their belief, the illness that had attacked him could be treated by a modern doctor, and was not the result of a “spiritual” spell cast on him by someone.

So, COCOBOD, please do go full steam ahead, with the pension scheme for cocoa farmers.