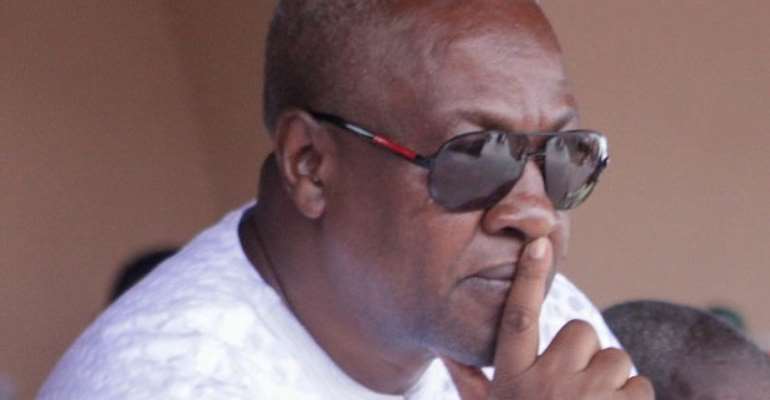 John Mahama
Some aspects of the NDC's so-called 'People's Manifesto' are so obscure that until the former president highlights them, they would remain unseen and sometimes unseemly.

The construction of mortuaries for the Zongos as a development project for these segments of the country until the former president mentioned it during television interviews in the Volta Region was hidden in the bowels of the manifesto.

The furore triggered by the so-called mortuaries as development projects among sections of Muslims and non-Muslims alike is understandable. To ascribe such morbid issues to a section of the population is not only demeaning but suggestive of desperation and incoherent cognition on the part of the source.

The former president is racing against time and so should sometimes be pardoned for such avoidable lapses in thoughts. Not so, however, for the composers of the 'copy copy' manifesto who should have identified the silliness of the Zongo mortuary entry. It is outright balderdash.

The backlash has been anything but charitable. Little wonder a few hours after the nonsensical and unfeasible promise, one of many, a rejoinder of sorts was issued.

Unfortunately rather than address a so-called 'mischievous online publication', as the Agyenim-Boateng composed rejoinder described the emanating story, it was rather full of unnecessary innuendos, references and historical distortions.

Having failed to benefit from the antiquated and fatigued 'aliens compliance order' campaign mantra, the NDC rejoinder on the Zongo mortuaries returned to that module shamelessly.

They used it when former President J.A. Kufuor was campaigning telling Zongo indigenes that should the NPP man win the order would be re-enacted.

Rambling about inequalities between the Zongos and deprived urban settlements which the NDC government failed to address, having been at the helm for more years than any government in the post-independence history of the country, it was an exercise in futility.

Former President John Mahama is unable to meet the standards set by his successor and would do anything to win the favour of the Zongos, including presenting the construction of mortuaries as a development issue.

Zongo indigenes cannot be fooled by such cheap politics of mortuaries. They deserve quality education gratis at the senior high school level, equal opportunities with their colleagues on the other side of the urban settings not mortuaries behind their houses.

From Okada to Zongo mortuaries politics, there is no end in sight for the opposition party's weird campaign tactics.

Perhaps the NDC has more weird arrows in its quaver.

MPs split heads as anti-LGBTQ+ bill to be laid in Parliament...
18 minutes ago

Angola President in Ghana for 3day visit
23 minutes ago