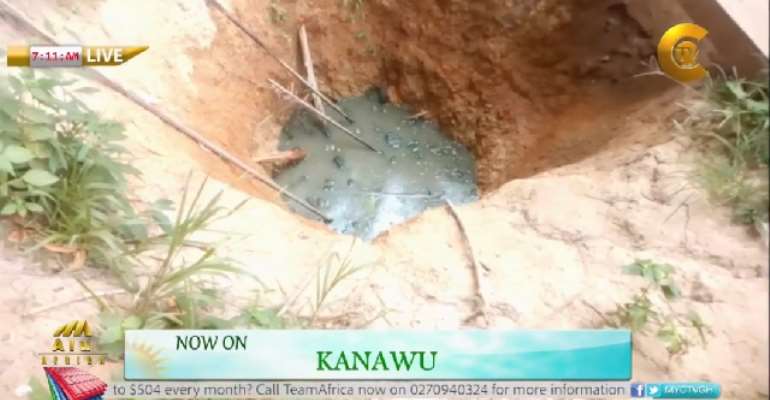 The Dade Mantse of Tortibo, Mr Steven Teye, has said the people of the area, who rely on a frog-infested water source for domestic use, normally boil the fetched water until the amphibians die in it and then use it to prepare their soup.

He told Kwame Appiah Kubi on CTV's morning show, Anopa Dwabre Mu, on Tuesday, 22 September 2020 that they have no choice but to resort to the murky amphibian-riddled water for domestic use because water from a mechanised borehole in the area turns reddish after a while, thus, unfit for home use.

Also in the studio was the Assemblyman for the area, Mr Jonathan Ayamboro, who said he was baffled by the water situation at Tortibo and its surrounding communities such as Pupuni and Kokonor because they are not far from the Akosombo Dam within the Asuogyaman constituency of the Eastern Region.

Mr Ayamboro, who is also the sub-Committee Chairman on Works at the Assembly, said: "Tortibo is even part of Akosombo, which hosts Ghana’s major hydropower dam but we don’t get good water to drink".

He said the community wrote to the Volta River Authority over the matter "but they explained to us that the reservoir cannot pump water uphill due to the pressure".

Per his estimation, about 700 people live within Tortibo and are compelled to contend with the poor water situation on a daily basis.

Adding his voice to the concern, a former District Chief Executive (DCE) of the area, who served under the Mahama administration and is the incumbent MP for Asuogyaman, Mr Thomas Ampem Nyarko, said he was very well aware of the problem and put in some interventions, both as a DCE and MP to help the situation.

"It is not just Tortibo", he told Appiah Kubi.

"The same situation pertains at Kokonor and Pupuni", he said.

"They all have a water problem".

"I sunk a borehole at Kokonor. I recently went to Pupuni and Tortibo with the Assemblyman and gave them some money to fix a faulty borehole. The water situation is a problem", he said.

"It is shameful because these communities are very close to Akosombo", he bemoaned.

Mr Nyarko said at a point in time, he contracted the Ghana National Fire Service to be supplying clean water to the communities "but it is not sustainable".