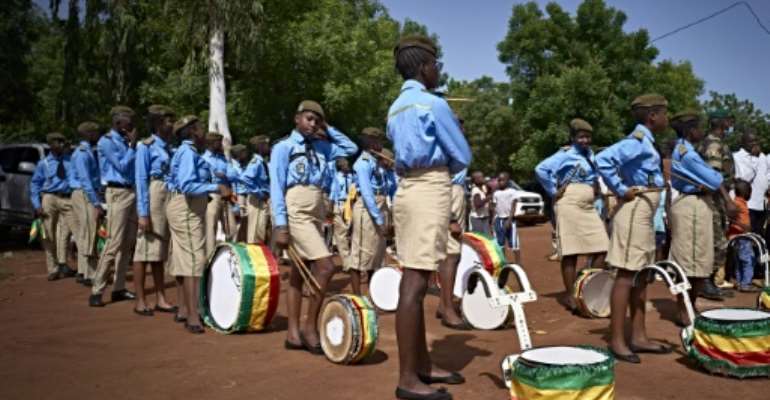 Young musicians get ready for the parade at the ceremony marking the anniversary of Mali's independence in Bamako. By MICHELE CATTANI (AFP)

A recap of the key dates in Mali, which on Tuesday celebrates 60 years since independence.

On September 22, 1960, Mali becomes independent. Under president Modibo Keita, it declares itself a socialist state.

On November 19, 1968, Keita is overthrown in a military coup led by Moussa Traore, who becomes "president for life" and rules the country for 22 years.

Traore is ousted on March 26, 1991 by a military rebellion which involves heavy street fighting in the capital Bamako and leaves over 100 people dead. Amadou Toumani Toure is installed as president.

In 1992 the regime holds elections under a new constitution and Alpha Oumar Konare becomes the country's first democratically elected president.

In the 2002 election, Toure returns as president.

In 2006 -- following previous rebellions in the 1960s and 1990-1994 -- there is a fresh outbreak of fighting between government forces and the Tuareg ethnic group in the north.

There are several attacks and hostage-takings up to 2009, interspersed by peace deals.

In 2012 Tuareg rebels and other groups launch an offensive to seize towns in the north.

Soldiers overthrow Toure saying his regime failed to give the armed forces the means to defeat the rebellion.

Tuaregs and rebels allied to Al-Qaeda in the Islamic Maghreb (AQIM) move on to capture the capitals of the three northern regions, but the Tuaregs are soon ousted by the Islamists.

In January 2013 former colonial power France launches a military operation to drive back the Islamists.

In February the European Union sends 600 soldiers to train the Mali army. In July a 15,000-strong UN peacekeeping force, MINUSMA, is deployed.

The government, armed groups and international mediators sign a peace accord in May 2015, with the Tuareg rebels signing in June.

But the country remains in the grip of violence, fighting jihadists as well as intercommunal clashes.

On August 18, 2020, Keita is toppled in a military coup, following several months of crisis.

Regional bloc ECOWAS condemns the coup and pledges a range of retaliatory actions, including financial sanctions.