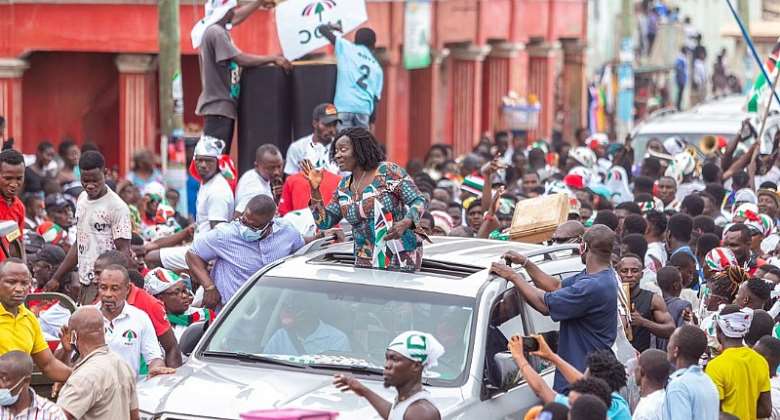 The Vice Presidential Candidate of the National Democratic Congress (NDC), Professor Naana Jane Opoku-Agyemang has called on the people of the region to grant the NDC a massive win in the December general elections.

The Running Mate, who arrived in Elmina in the Central Region, to a rousing welcome as she begins her campaign tour of the region, expressed confidence that the region would swing in favour of the NDC.

“We trust you to help us win power so that we can serve you better,” she told a mammoth crowd of traders, commercial drivers, commuters and residents at the Elmina market.

She asked the electorate in the region to consider the immense development the region secured under the previous NDC administration, saying “the NDC has never, and will never neglect the region.”

“You all have seen the difference, and our track record in this region stands out. I trust that you will deliver victory for the NDC,” she added.

She enumerated a list of promises that the NDC has fulfilled in the region, citing various infrastructure projects in the transportation, health, education, agriculture and fishing sectors, as well as development programmes in trading, technical and vocational training, entrepreneurship and job creation interventions, among others.

“We promised roads, schools, hospitals, jobs, quality technical education, development without discrimination, and we delivered all,” she said, reminding the electorate to check the evidence of the party’s track record.

Prof. Opoku-Agyemang, an indigene of the region, urged the electorate not to allow themselves to be deceived with sweet promises that never get fulfilled.

The Running Mate noted that the region, which has been faced with several unfulfilled promises by the present administration, “deserves better.”

“We shall restore hope and socio-economic progress in this region through the various policy interventions that we have planned for you,” she stressed.