Witch Persecution And Atheism In Malawi 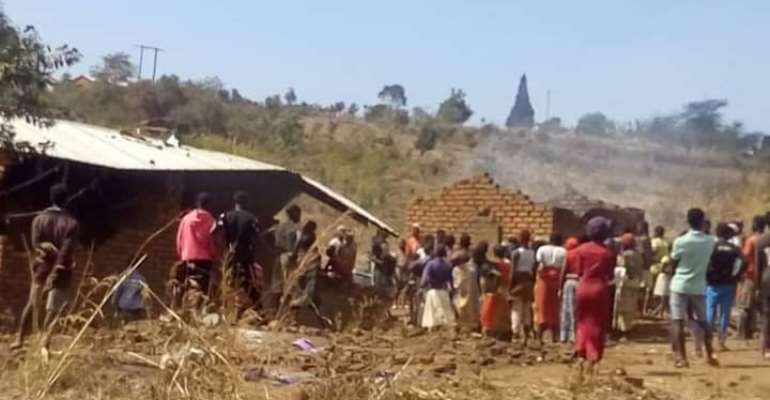 The Advocacy for Alleged Witches (AFAW) has been notified of another case of witch killing in Malawi. A local newspaper reported this unfortunate incident. According to the report, a village mob lynched a 55-year old man, David Mkandawire. He was accused of bewitching the village head. The man temporarily fled the community but was lynched on his return to the community.

The police have yet to apprehend suspects. In August, AFAW was informed about a related incident, also in Malawi. In this case, a local mob destroyed houses and other belongings of suspected witches. Photos that were sent to AFAW showed a rampaging mob setting on firehouses of alleged witches in a rural village.

In a text message, an advocate in the area says: "There is pandemonium in Mbuta and Misi villages in Dowa district where villagers are setting houses on fire and killing livestock for individuals who allegedly practice witchcraft. The laws of Malawi do not recognize the existence of witchcraft".

Now, if the law of Malawi does not acknowledge the reality of witchcraft, what are the law enforcement agencies doing? In an effort to understand the context, I shared the newspaper cutting with advocates in Malawi and asked for their thoughts. One said: "This is becoming a sorry sight. Almost every day we have one person killed for witchcraft. Community-based interventions could be the key to ending these abuses".

Another advocate replied: "Terrible". Then he stated: "The fact that this story has been filed as a brief shows that the media and society look at these issues as normal". I asked him to clarify his point. And he noted: "I am saying that this is supposed to be a front-page story. It is a big story. But we have accepted such things as normal so we cannot give them a big space". I inquired to know what could be done to change the situation.

And he responded: "Raising awareness is the key. There are no serious programs in Malawi to address this. The only guy that has been fighting against this is George Thindwa. His mistake was that he launched a campaign arguing that there was no God. So when he started the anti-witchcraft campaign, he had already lost the plot".

Now I asked him what would be the best 'plot' to end this harmful practice. He said: "You can mobilize resources and launch programs here. I am sure even local sponsors can join if you do it well". His response did not address my question. So I asked him: "Should one lie about one's belief to get the campaign right?" And he said: "The point is when raising awareness, you need to consider sensitive issues. If you want to tackle witchcraft, you do not focus on the arguments that there is no God, considering that you are dealing with people who are so deep in religion". This advocate was not the first person to make this point- to fault the campaign by atheists to combat witchcraft allegations and witch persecution.

Indeed some have suggested that expressive atheism is a stopper, and is counterproductive in the campaign to eradicate witch persecution in the region. They advise that atheists should conceal or lie about their atheism when campaigning against witch persecution. I disagree. This proposition, which demonizes and de-legitimizes atheism has been part of the religious propaganda for ages. To wage a campaign that can stand the test of time, it is pertinent that such an initiative be fact and evidence-based. It is important that campaigners make clear their position on the existence of God when asked. While I understand the point in that suggestion, I think the proposition is mistaken. From my own experiences, atheism is a stopper for many people in persuading them to abandon the belief in witchcraft. But that does not diminish its campaign value or worth. Many witchcraft believers understand but may seem unpersuaded when anti-witchcraft campaigners state that they are atheists. They react out of cognitive dissonance. Witchcraft believers do not necessarily see atheistic viewpoints as invalid but as having some logical implications that conflict with what their religions teach them.

Look, many witchcraft believers think it is contradictory and religiously dishonest to claim to believe in God and not believe in witchcraft. When one tries to get into a conversation with a witch believer or tries to reason a person out of witchcraft belief, some of these questions usually follow: What is your religion? Which church do you go to? Do you believe in God? The way one answers these questions determines how the message is received. If one answers that he or she believes in God, has a religion, or goes to church and still does not believe in the reality of witches, the person is seen as a weak or dishonest believer and immediately get preached to. If one says that one is an atheist, the person is likely to get a reply such as "Nhhh No Wonder". Witch believers understand that it is expected that a disbeliever in a witch should be a disbeliever in a god. The witch believer may choose to listen cautiously and curiously, hoping to be persuaded. That is if the person is a bit open minded and liberal. Or the witch believer may decide to passively pay attention or may turn to the opposite direction shutting out this demonic talk.

Such reactions should not make campaigners water down the facts and evidence or lie about their belief or disbelief. In campaigning against witch persecution, non-belief in witches or by implication in God is an asset, not a liability. Those who think otherwise are greatly mistaken. Non-belief frees one from the crippling fears and anxieties that too often stop believers from waging an effective campaign against this dark and destructive phenomenon. Witch persecution persists in Malawi and other African countries due to lackluster awareness and intervention programs that do not compel or persuade believers to rethink the reality of witchcraft. This campaign status must change.

As the reports from Malawi show, witch persecution is ravaging many parts of Africa at an alarming rate. Witch imputation has created a situation of anomie and impunity. The situation needs urgent fact and science-based intervention. Africans must rally all resources in addressing this sociocultural disease.

Africans must wage an effective campaign that reorients the minds of the people. They should put in place community-based education programs that dispel the belief in witches and intervention mechanisms that will end these horrific abuses even if the logical next step for Africans is embracing atheism.