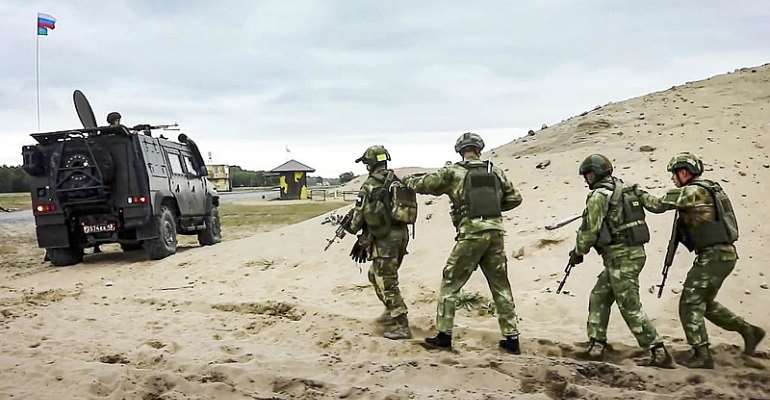 Russian and Chinese armed forces have started joint military exercises in southern Russia alongside troops from Armenia, Belarus, Iran, Myanmar and Pakistan. Neighbouring Ukraine is flexing its military muscle as well – together with the US.

The “Caucasus 2020” drills deploy wheeled vehicles and light weaponry to be flown to out by China's latest transport aircraft.

In a massive display with hundreds of tanks, armoured personnel carriers, fighter jets and a flotilla of warships, the exercises will continue until 26 September and focus on defensive tactics, encirclement and battlefield control and command, according to a statement by the Russian Defence Ministry.

Some 80,000 troops are expected to be involved in the manoeuvres. But Moscow says that the number of frontline soldiers does not exceed 13,000, so it is not obliged to invite observers from the Organisation for Security and Cooperation in Europe (OSCE) as stipulated by the 2011 cornerstone Vienna Document that defined the scope of military exercises on European soil.

The action takes place in Russia's Southern Military District and in the Black- and Caspian seas, where warships of Iran's navy will take part.

Some 1,000 troops from China, Armenia, Belarus, Myanmar and Pakistan are taking part in the exercises as well.

The exercises have special meaning for China-Russia ties “at this important moment when the whole world is fighting the pandemic,” according to Russia's Defence Ministry.

Since establishing a “comprehensive strategic partnership" two decades ago, China and Russia have cooperated increasingly closely on military matters and diplomacy, largely to counter US influence. Their armies regularly hold joint exercises and they support each other at the United Nations over issues including Syria and North Korea.

Slavic Brotherhood
These exercises coincide with the “Slavic Brotherhood” drills, a series of operations initiated in 2015, hosted alternately by Russia, Belarus and Serbia. This year they take place at the Brest training grounds near the border of Russia.

But this time, Serbia, a candidate for membership of the EU, didn't want to get caught in the crossfire. According to the Russian Tass News Agency, “Serbian Defence Minister Aleksandar Vulin announced that the European Union demanded that Belgrade cancel the upcoming drills in Belarus,” and the Serbian government decided to freeze all military drills with other countries for six months.

According to Balkan Insight, a website run by the Balkan Investigative Reporting Network (Birn), Serbia's Vulin added that “In the next period, (Serbia) will not participate in any exercises or military activities with Nato, the CSTO, Russia, the United States, China, the European Union, or the East or the West.”

US is training too
Coinciding with the Russian sabre rattling are the Rapid Trident 20 exercises with some 4,000 troops, led by US Europe-based troops. According to the Army Times, the US Army's most popular news site, “the war with Russia spurred the Ukrainian government to seek closer defence cooperation with the US and Nato militaries…in order to facilitate the Ukrainian Ground Forces' transition from Soviet-style tactics and doctrine to Nato-aligned methods of fighting.”

The exercises are part of yearly routines, but seem to have intensified in scope with growing tension between the US and Russia.

According to a recent report by the Stockholm International Peace Research Instutute (Sipri), Russian military expenditure increased by 30 percent in real terms between 2010 and 2019 and by 175 percent between 2000 and 2019 when it exceeded $65 billion.

Relatively modest
Compared to other global powers, Russia's military expenditure is still relatively modest. In 2019, the US spent over 11 times more than Russia on arms, and China four times as much. But compared to the largest military spenders in Western Europe – France, Germany and the UK, Russia spent about 30 percent more.

Meanwhile, there is no more international agreement on military expansion. The 1992 Conventional Armed Forces Treaty, signed just after the fall of the Berlin Wall and the collapse of the Soviet Union, signed by 22 countries, including Russia and the US, limited the number of conventional troops on European soil.

It limited combined troops of European countries to 2.6 million, US troops (at various bases in Italy and Germany) to 250,000; Turkey (a Nato-member) was allowed 530,000 troops. The total number of Russian troops was limited to 1.4 million. A follow-up treaty that better reflected post-cold war realities was never ratified.

In 2015, Russia unilaterally withdrew from the treaty, angry with Nato's enlargements and US plans to put a missile defence system in Poland, but also after Moscow's annexation of Crimea, in the Ukraine, and increasing hostilities between Ukrainian troops and Russia-based rebels in the east of that country.