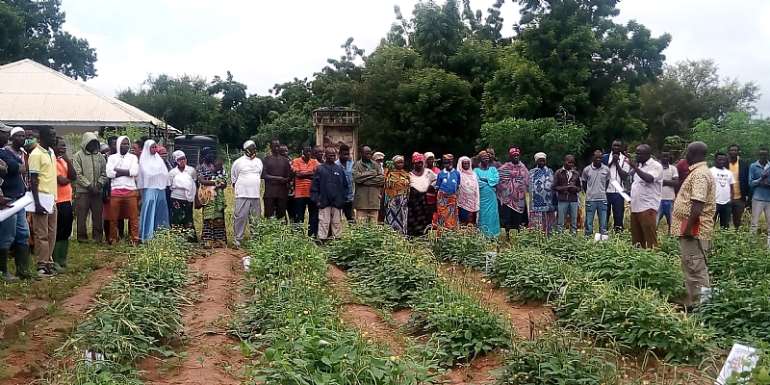 Education Of Participants On The 69 Genotypes

The Host Country - Principal Investigator (HC-PI) of the project, Dr Francis Kusi, a Senior Research Scientist at Manga Station of CSIR-SARI in welcoming the participants indicated that it is the project’s objective to empower women, youth, young scientist and students with the requisite knowledge, skills and support to take agriculture and for that matter cowpea production as income generation venture to improve their livelihood and to contribute to food and nutrition security in Ghana and beyond. Dr. Kusi, added that he invited the participants under the ILLSR project for two purposes.

To afford the participate opportunity to select their preferred genotypes out of 69 multiple resistance cowpea genotypes as cowpea producers, traders, consumers and processors.To introduce them to the field performances of two cowpea varieties that have gained nation recognition (Wag Kae and Kirkhouse Benga) and to train them on good cowpea production practices.

He added that the two varieties have been selected among the only three cowpea varieties (Wand Kae, Kirkhouse Benga and Padi Tuya) to be supplied nationwide under the Government’s flagship Planting for Food and Jobs (PFJ) programme.

The farmers were told that the 69 genotypes of cowpea were selected after several years of collaborative research under two expired projects (the Feed the Future Legume Innovation Lab and Innovation Lab for Climate-Resilient Cowpea) involving CSIR-SARI, University of California Riverside, INERA in Burkina Faso, ISRA in Senegal and IITA - Nigeria.

The 69 genotypes currently being evaluated under the ILLSR, therefore, represent the promising genotypes selected across these partner countries. Dr. Kusi mentioned that the 69 were selected from populations developed using molecular breeding method on the SNPPs platform which aimed at introgression of mu and Striga. In addition to these, the genotypes also combine traits like extra early to early maturity, large seed size, white seed coat colour, fast cooking and sweet taste.

To enable the farmers to select their preferred genotypes based on every aspect of the genotypes, seed album of each genotype was placed by each plot. This enabled the farmers to make informed selection based on the seed quality and the field performance of the genotypes in terms of earliness, pod load, pod length, biomass yield, dual-purpose (grain + biomass yield), pest and diseases resistance, seeds per pod, seed colour, size and other features.

After the inspection and selection, the participants were asked to fill a questionnaire to express their views about the work done by the project team and whether the genotypes presented to them met their expectations. In their interaction with the media, the participants were impressed about the quality of work done by CSIR-SARI and partners over the years and expressed their satisfaction about the field performance of the genotypes and seed quality.

Although each participant was asked to select their best 5 genotypes, yet many of them said besides the 5, they still have other promising genotypes that equally meet their preferred traits. The traits that were of interest to most of the participants were earliness, high grain and biomass yield as well as their resistance to pests and diseases, attractive large seed size and colour. Dr. Kusi promised them that they will be involved in on-form evaluation of the genotypes they have selected and also invite them to come and have a taste of different cowpea genotypes in different cowpea food types such as red red, gonya, tubani, koose, and waakye.

These include the District and regional Directorate of Department of Agriculture, regional and national Directorate of seed inspection division, SEEDPAG, NASTAG, the media, FBOs, and other projects. Dr. Kusi informed the participants that CSIR-SARI has strategized to ensure that early generation seeds of these varieties are produced and made available to the certified seed growers in the right quantities at the right time to production and supply to farmers under the PFJ programme across the nation.

He took the participants, some of whom are out growers of CSIR-SARI through production practices to ensure quality seeds production. He stressed on the practices he and his team have developed to cut down the cost of cowpea production to increase the profit margin of cowpea farming. He added that CSIR-SARI in its next cowpea varietal release under the ILLSR project is to present to the farmers' cowpea varieties that has 90% to 100% of its pods maturing at the same time.

This will mean that the harvesting of such varieties can be mechanized, and this will serve as further cut in cost of production of cowpea. Because the cost of labour in picking dried pods of cowpea constitute the most difficult and labour-intensive task in cowpea production. He indicated that most of the current released varieties flower continuously so long as there is good moisture and the flowers are protected.

This implies engaging labour at high cost in picking the pods one by one as they dry over a period of time which eventually increase the cost of production. Dr. Kusi and his team of young scientist under the ILLSR project at CSIR-SARI are at it again, as usual, they are doing their best to put smiles on the faces of smallholder women and youth in agriculture to increase cowpea productivity and production for wealth creation and to increase food and nutrition security.

Education Of Participants On The 69 Genotypes