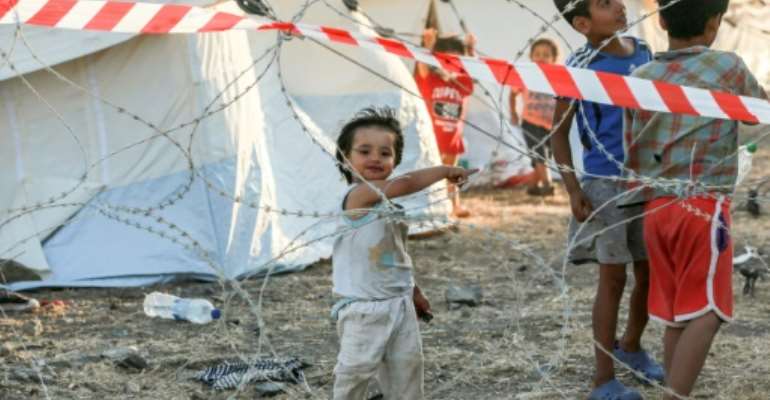 Two weeks after Greece's Moria camp burnt down, offers to rehouse thousands of homeless migrants have come piecemeal, with some EU states refusing to take any. By MANOLIS LAGOUTARIS (AFP/File)

The failure of the European Union's migration policy could not have been laid out more starkly -- an already miserable camp burned and thousands of refugees homeless.

On Wednesday, two weeks after the destruction of the Moria camp on the Greek Island of Lesbos, Brussels will launch its latest proposal for EU asylum policy.

Home Affairs Commissioner Ylva Johansson wants the 27 member states to share the burden of handling asylum claims from the migrants arrived on the bloc's shores.

And this time, the proposed system won't be voluntary -- a tough concession for many member capitals to swallow.

"It's obvious to everybody that ad hoc solidarity or voluntary solidarity is not enough. That has been proven for many years now," she said.

"It has to be mandatory, all member states have to help when there is a situation when a member state is under pressure and a lot of people that need protection."

Alongside a way to distribute would-be refugees away from the coasts of Italy and Greece there will be tougher rules on sending home those whose claims are refused.

But, five years after the 2015 migration crisis and with annual "irregular arrivals" down to 140,000 a year, EU members are still deeply divided on the issue.

An emergency EU plan during that crisis to redistribute arrivals, pushed by Germany, was opposed and then ignored by Hungary and Poland, which took in zero asylum-seekers.

"It will have common structures on asylum and return and it will have a new strong solidarity mechanism," she said, surprising some sceptical capitals.

The Dublin Regulation -- which governs which member state handles a new arrival's asylum claim -- was established in 1990 and was reformed most recently in 2013.

It states migrant asylum claims should be handled in the EU country where the applicant first enters the system, to prevent undocumented migrants flowing around the bloc.

Johansson did not give AFP full details of the alternative scheme the Commission will unveil on Wednesday, but stressed that the key would be solidarity.

This does not necessarily mean, however, that recalcitrant anti-immigration regimes like that in Hungary would be obliged to resettle refugees.

"It's not only relocation, it could also be other situations like, for example, helping with returns," she said.

This would imply that countries that believe they can cope with welcoming more migrants would take some of the strain off the Greeks and Italians.

Europe's plan has been a long time coming and will be hard to sell to EU leaders, who meet for a summit in Brussels on Thursday focused on foreign affairs.

But the fire in Moria, which underlined the dismal state of the system for housing refugees stuck on the Greek islands, has focused minds somewhat.

Offers to rehouse the now homeless Moria refugees have come piecemeal, with some states like Austria refusing point blank to take any.

Brussels is working with Athens on a pilot project to jointly build and run a new facility, but Johansson was clear there must be "no more Morias".

To relieve pressure on the frontline, asylum claims and returns must be processed much more quickly by member state legal authorities, she said.

Currently less than a third of migrants whose claims are refused are actually sent back.

"To fight human smugglers, organised criminal groups that earn a lot of money by risking people's lives ... we have to do that together with third countries."

The 2015 migration crisis had led the EU to reach a controversial agreement with Turkey to reduce the number of arrivals on Greek shores, in exchange for funds.

Equally controversial with human rights defenders, was EU support for the Libyan coastguard to curb landings on Italian shores.

"Of course I have a difficult task, to find a proposal that can be accepted by all member states and by parliament," Johansson told AFP.

"So my guess is that when I present my proposal, I will have no 'hurray, we won'," she admitted, calling for a "sober discussion" and a pragmatic response.

We were not influenced by any party to reject your rice, we ...
9 minutes ago