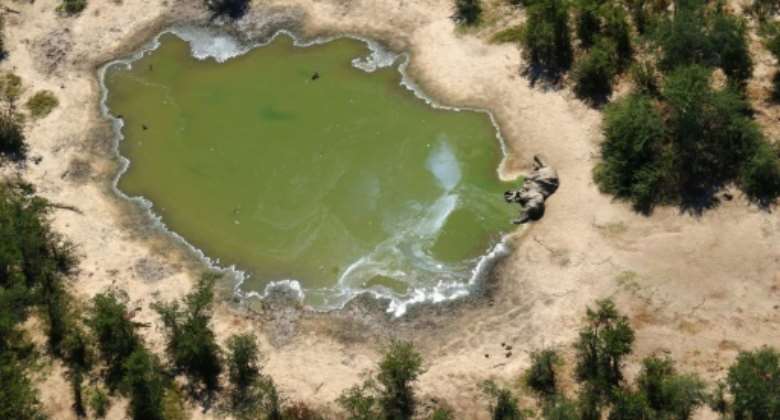 The fact that the dead elephants' tusks were intact ruled out poaching as a cause of death. By - (NATIONAL PARK RESCUE/AFP/File)

More than 300 of the pachyderms have mysteriously died since March, with their intact tusks ruling out the hypothesis that they were killed by poachers.

"The deaths were caused by poisoning due to cyanobacteria which was growing in pans" or watering holes, the principal veterinary officer of the Department of Wildlife and National Parks, Mmadi Reuben, told reporters.

Reuben said the deaths had "stopped towards the end of June 2020, coinciding with the drying of pans."

According to the wildlife authorities around 330 animals have died and blood tests were consistent with the finding that a species of cyanobacteria that produces neurotoxins was the cause.

Tests were conducted at specialist laboratories in South Africa, Canada, Zimbabwe and the United States.

Officials have ruled out anthrax or human involvement such as poaching, according to Cyril Taolo, deputy director of Department of Wildlife and National Parks.

The government said it was continuing studies into the occurrence of the bacteria.

In the winter, elephants hydrate themselves mainly by eating roots and bark, especially of the baobab tree.