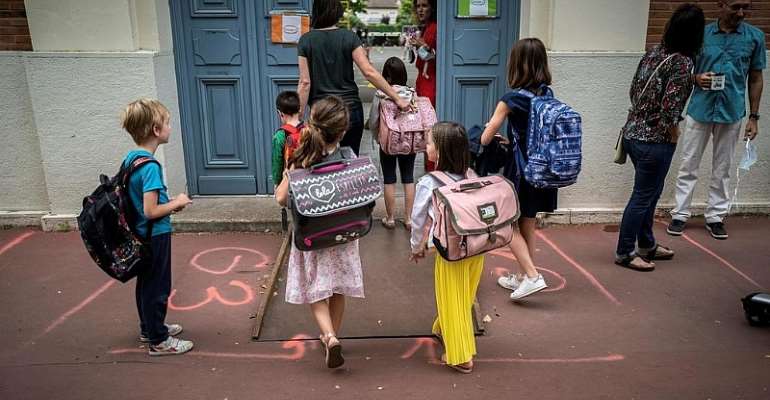 France's government has decided to ease rules on pre-school and primary school closures as of Tuesday, after health advisors said children were at low risk of serious illness or of transmitting the virus that causes Covid-19.

France's Education Ministry announced Sunday that classes in pre-school and primary schools (for pupils aged 3-10), would “continue to be held as usual” even if a classmate tests positive for Covid-19.

As of Tuesday, the new rules are to replace current restrictions whereby pupils considered to have been in close contact with an infected person could only return to school if they test negative after staying home for seven days.

The decision comes after the High Council for Public Health advisory board to the health ministry published a notice Thursday stating “children pose little risk of contracting serious cases and of spreading SARS-CoV-2”.

Three weeks into the school year, 89 public and private schools are currently closed under the existing protocol, a small fraction of the total 61,500, although many more classes within other schools have also been suspended.

However, the ministry said the current protocol, which include isolating suspected cases, identifying contacts between pupils and possible closures of classes or entire schools would continue to be applied if three pupils in the same class tested positive.

But teachers, who are required to wear masks, will no longer be considered to be “contact cases” if they have been in contact with unmasked pupils testing positive for Covid-19.

With confirmed cases on the rise and Covid-related hospital admissions increasing, unions questioned the motivation for the government decision.

“You can say children pose little risk of spreading the disease, but not that they pose no risk. Otherwise why would the prime minister call on grandparents to refrain from picking up their grandchildren at school?” asks Guislaine David, general secretary of teachers' union SnuiPP-FSU, in newspaper Le Parisien.

“To relax the rules in this way, while they are toughened everywhere else, is incomprehensible. The only justification is economic.”

Overall Covid-19 figures posted Sunday evening recorded 10,569 new cases with an average infection rate that had increased from 5.6 to 5.7 percent in the previous 24 hours, consistent with trends of a simmering epidemic in recent weeks.