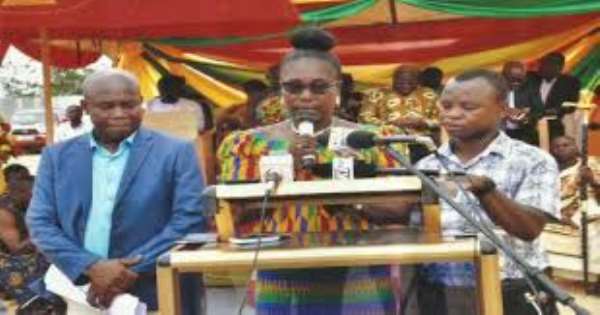 The Municipal Chief Executive for Wassa Amenfi East in the Western Region, Madam Helena Appiah has praised President Nana Addo Dankwa Akufo-Addo for initiating the Community Mining Program which is massively supporting the youth within in her municipality.

In an interview with newsmen in Wassa Akropong, Madam Helena Appiah disclosed that her municipality was the first to be launched by President Nana Addo Dankwah Akufo Addo last year July 2019 through her effort and the Member of Parliament for the area Mr. Patrick Kwame Aboagye-Siaime.

The MCE said, after the commissioning of the Community Mining in Bodie, the chiefs of Dadieso, Abreshia, and Nkuokuo all agreed and offered land for the assembly to enable the youth engaged in the program.

Madam Helena Appiah said, the member of parliament for the area together with NPP Constituency Executives spent so many funds to clear the Bodie site to pave way for the teeming youth within the Wassa Amenfi East municipality embark upon responsible mining since it is their only source of livelihood.

The MCE further hinted the number of people within her municipality especially the youth who have embraced the community mining program is very huge and is grateful to the NPP government for getting them sustainable jobs.

“Though there has been challenges regarding the land which was given out by the Abreshia chief for the community mining program which has made them spent huge sums of monies on the issue and currently the site has been abandoned”, she added

On developmental projects under her watch since assuming of office in May 2017, she inherited a huge debt which the Wassa Amenfi East Municipality was owing the contractors who have executed various types of projects but her sector minister for Local Government and Rural Development, Madam Hajia Alima Mahama encouraged her to settle most of the constructors which she worked so hard to pay them and continue with the abandoned projects.

On education, Madam said under her watch as the municipality chief executive for Wassa Amnefi East, the assembly handed over a total of 1,600.00 tablets and chairs for kindergarten (K.G) and the Junior High School (JHS) 300 mono desks has also been distributed as well as 225 galvanized desks handed owner to the municipal education directorate and distributed to the various public school.

On health, the assembly has already handed over an ambulance for the municipal health directorate, through the ministry special initiatives; plans are far advanced to put up an ambulance Centre within the municipality.

Whiles most CHIP compounds have also been handed over to most of the communities to address the health needs of the people. Madam Helena Appiah commenced her hardworking member of parliament Mr. Patrick Kwame Aboagye-Siaime for using her share of MP’s health fund to support in the emergency cases within the municipality.

On water and sanitation, the assembly has handed over 10 boreholes within Fifteen 15 pump ones to the communities with water challenges.

Ten metal bins containers have also been given out by the assembly to support in the collection of refuse in the municipality, Bodie, Gyapa, and Wassa Akropong, the municipal capital has been blessed with special buildings as refuse arena with strong supervision.

A slaughterhouse that began by the former president John Agyekum Kuffour to house meat at a hygienic condition and was abandoned by the NDC government is now witnessing great strides under her watch.

On security, the Wassa Amenfi East Assembly has handed over a land cruiser vehicle to the municipal police command to support in their day to day operational activities to combat criminal activities in the area. The magistrate court which commenced in the J. A Kuffour era is also fully completed.

On the government flagship programs and social interventions such as the Free SHS, planting for food and jobs, the assembly has already distributed 120,000 cocoa seedlings, 35,000 palm seedlings, and handed over 64,000 cocoa seeds to the seed producers.

The planting for export and rural development is also making impacts, the Nation Builders Corps (NABCO) as well as the Youth Employment Agency has also benefited immensely from the teeming youth in the area.

And again, most of the deplorable roads within the area have seen a facelift as it was declared as the year of roads by the president.

Madam Helena Appiah appealed to the good people of Wassa Amenfi East and the Nation as a whole to renew the mandate of President Nana Addo Dankwah Akufo and his NPP led administration to do more.

Mahama was disastrous in managing Ghana’s education — NPP’s ...
10 minutes ago