By Peter Stebbings, with Ludovic Ehret in Beijing 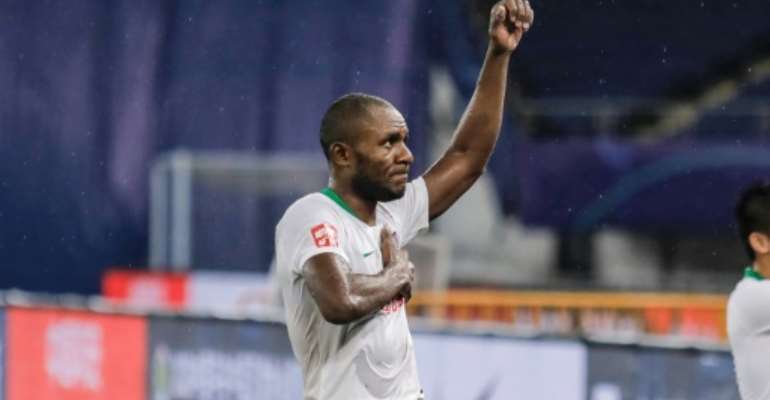 Qingdao Huanghai's Joseph Minala played in Italy as a teenager. By STR (AFP)

Joseph Minala does not wish to dwell on the bizarre age claim which propelled him into the headlines in 2014, but there is just no getting away from it.

Minala was a budding star at Italian giants Lazio when a report out of Senegal claimed that he was not aged 17, as he said, but 41.

The allegation gained traction because Minala's rugged appearance and well-developed physique made him look significantly older. He was subjected to cruel ridicule on social media.

But Italy's football association conducted an investigation and concluded that he was telling the truth.

Minala turned 24 last month and is now playing in the Chinese Super League, but the midfielder says that he cannot shake off the stigma.

"I had opportunities at some clubs (to move there), but I think it didn't happen because of this business," he said.

Minala was accused of being in his forties when he was just 17. By STR, STR (AFP)

"This is an image that some people unfortunately have of me," Minala added.

Speaking by telephone from Suzhou, where his new team Qingdao Huanghai are playing in a 'bubble' to thwart the coronavirus, Minala said: "I would have had a different career (without this controversy).

"Sometimes people prefer to ignore that I'm a good player and only point out that aspect of me."

Minala's agent at the time explained that Minala looked older because of his difficult back story, which includes a spell in an Italian care home.

The player was spotted as a talented youngster in Cameroon, and a former player who was also an agent promised him a trial at AC Milan.

His parents spent "a lot of money" to finance the trip to Italy, but after arriving the 14-year-old Minala found himself stranded at a Rome train station.

"I was told that people were coming to pick me up for the trial but I waited an hour, an hour-and-a-half, and still no one was there," he said.

"I only knew two words of Italian. I was abandoned at the station with my two suitcases and a mobile phone without a SIM card in it.

"In the end, it was a scam that I never understood."

Not knowing what to do, Minala went to a police station.

"I didn't know anyone, I didn't know where to go, I wanted to tell my story to the police and return to my country," he recalled.

"But since I was an unaccompanied minor, they took me to a hospital for tests, then to a social welfare centre and I was enrolled in an Italian school.

"This is where my adventure began."

Minala lived in the housing centre with other youths and it was there that he trained to do another job in case his football dreams failed to materialise.

"I'm good at baking. Maybe after football, I'll open a bakery, you never know," he laughed.

Mino Raiola, the high-profile agent who represents Paul Pogba and a slew of other stars, spotted Minala playing in amateur football in the Rome region and took him south to Napoli.

Minala has ambitions of playing for Cameroon. By STR (AFP)

After one year as a youth player at Napoli there was interest from Juventus, AC Milan and Inter Milan, he says, but in 2013 he joined Lazio's under-19 squad.

It was a year later that the claims were made about his age and he then made several loan moves, notably to Bari and Salernitana in Italy's second tier.

At the start of this year he moved to Qingdao on loan, but the coronavirus pandemic delayed his debut until last month.

He will spend this season with Qingdao and is unsure what will happen when his contract expires in June 2021 at Lazio, where he has made a handful of first-team appearances.

"I keep going on with my life, despite everything people have tried to do against me," said Minala, who has ambitions of playing for Cameroon's national team.

"A lot of people expected me to stop playing or go crazy."