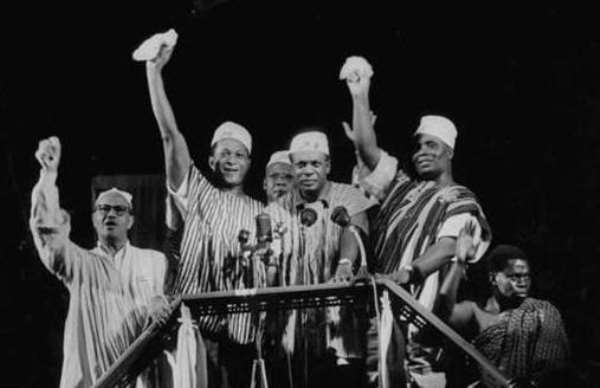 The incoming NDC government or any future NDC government must abolish Founders’ Day as a matter of urgency and revert to FOUNDER’S DAY in honour of the FATHER AND FOUNDER OF GHANA, OSAGYEFO DR KWAME NKRUMAH. Ghana has and always would have one founder, Osagyefo Dr Kwame Nkrumah.

Apart from Osagyefo Dr Kwame Nkrumah, the rest of the 5 individuals who were arrested and detained with him, by the colonial administration were described as cowards and nation wreckers by Late Honourable K A Gbedemah of blessed memory.

Apart from Dr Kwame Nkrumah, even within Ghana and on the African continent, not many people knows who Edward Akufo Addo (the father of this current president of Ghana), Joseph Boakye Danquah (A known CIA agent), William Ofori Atta (A Ghanaian Patriot who was a very good friend of this writer’s paternal grandfather, and who this writer greatly admires as an authority of Ghana’s history), Ebenezer Ako-Adjei and Emmanuel Obetsebi -Lamptey (Father of late Jake Obetsebi Lamptey and a good friend of this writer) are.

No one is denying that these five individuals and many countless others must not be recognised and honoured but the man who took Ghana across the independence line has and would always be remembered as the one in whose name many people across the world recognised as the father and founder of modern-day Ghana. As selfless as Dr Kwame Nkrumah is, he recognised the contributions of his former colleagues in the United Gold Coast Convention who together in unison pledge to adopt the name GHANA as the new name of the independent country after independence, whenever that is achieved. As is being propagated by Samuel Adjei Sarfo, Kwame Ahoofe and others that the name Ghana was put forward by Joseph Boakye Danquah, is not only pertinently false, dis-ingenious but outlandishly ridiculous. Kwame Ahoofe, Adjei Sarfo and their cohorts cannot twist history nor change what is recorded as FACT!

From the moment the New Patriotic Party won the 2016 December elections, they embarked on trying to change the history of Ghana by undoing all the good policies regarding the immense contributions of our father and founder, Osagyefo Dr Kwame Nkrumah, the first President of the Republic of Ghana, that the 5th President of Ghana, late Professor John Evans Kofi Atta Mills (Man of Peace) put in place. Changing FLAGSTAFF HOUSE’s name to a name that no one in the country recognise, the jubilee house, is not only uncalled for but outright foolish.

Thus, it is incumbent on the incoming NDC administration under President John Mahama to revert the FOUNDER’S DAY Holiday which commemorates the birthday of Osagyefo Dr Kwame Nkrumah.

The African Union recognised Dr Kwame Nkrumah’s contribution to the total independence of the African continent and thus was HONOURED as such. In 2000, BBC listeners worldwide recognised and VOTED Osagyefo Dr Kwame Nkrumah as the African of the millennium and the UNITED NATIONS AWARDED him a POSTHUMOUS AWARD for his contribution to the independence of the African continent. Across sub-Saharan Africa, Europe, Asia America and elsewhere, roads, buildings, university halls of residence and others’ have been named after OSAGYEFO DR KWAME NKRUMAH, FATHER AND FOUNDER OF MODERN-DAY GHANA and not Joseph Boakye Danquah. Outside Ghana when one mentions Joseph Boakye Danquah’s name, many folks asks, who is he? Samuel Adjei Sarfo and his cohorts cannot change the history of Ghana. When the criminal in uniform, the coup plotter Akwesi Amankwa Afrifa (a disgraced General of Ghana Armed Forces) overthrew the legitimate CPP government of Ghana, he thought he has got away with murder (after killing Major Bawa at FLAGSTAFF HOUSE) and later in 1967 when he executed the granduncle of this writer Lt Arthur and Lt Yeboah, he though he has finished the evil CIA plot. This writer visited Osahene Major Kojo Boakye Gyan in Hamel Hampstead, England, to personally thanked him for the revenge execution of the criminal in uniform, Akwesi Amankwah Afrifa. This writer wish Afrifa’s corpse would be exhumed and executed again and again and again for ordering the MURDER of his grand uncle, Lt Arthur of blessed memory.

In conclusion, Samuel Adjei Sarfo and his cohorts who wish to twist facts and down play the historical contributions of Osagyefo Dr Kwame Nkrumah would not succeed regardless of how many times they try. Afrifa and NLC CRIMINAL MILITARY JUNTA were not able to wipe the name OSAGYEFO DR KWAME NKRUMAH, THE AFRICAN SHOW, KWAME NKRUMAH SHOW BOY from HISTORY. Those who were alive during the June 4th 1979 Revolution witnessed history being made when the criminal in uniform, Akwesi Amankwah Afrifa, was executed for his crimes against HUMANITY. Afrifa and his criminal cohorts murdered thousands of CPP activists and other innocent Ghanaians. Gen Acheampong should have executed Afrifa but he was too timid to do the job and left it for the HEROS OF JUNE 4th 1979 under the leadership of OSAHENE KOJO BOAKYE GYAN AND FLIGHT LT RAWLINGS AND THE AFRC REGIME to take the criminal Afrifa down.

Angola President in Ghana for 3day visit
45 seconds ago