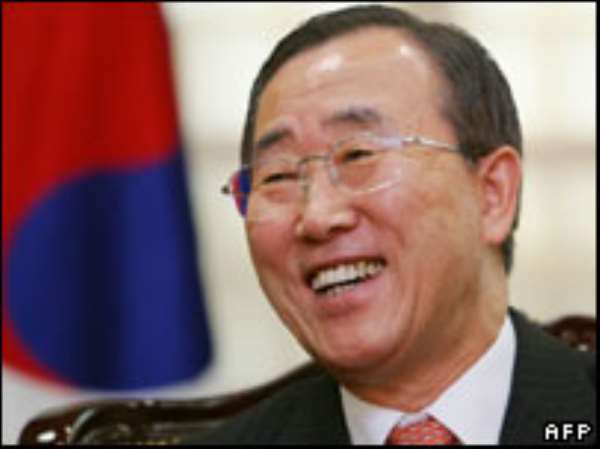 South Korea's foreign minister has won the support of the Security Council's five permanent members in an informal vote on the next UN secretary general.

Ban Ki-moon was the only one of six candidates to escape a veto in the informal ballot.

The poll is non-binding but, barring a major surprise, correspondents say Mr Ban looks set to take the top role.

The Security Council's recommendation will then be passed on to the General Assembly for endorsement.

There is a broad consensus within the UN that an Asian should be the next secretary general, the first since the Burmese U Thant from 1961 to 1971.

The 62-year-old Mr Ban has won all four of the UN Security Council's informal polls but this was the first time ballots distinguished between the five veto-wielding nations and the other 10 elected members.

"It is quite clear that from today's straw poll that Minister Ban Ki-Moon is the candidate that the Security Council will recommend to the General Assembly," said Chinese ambassador Wang Guangya.

India's Shashi Tharoor, who came second to the South Korean in all the polls, said he would not stand again.

"It is a great honour and a huge responsibility to be secretary-general, and I wish Mr Ban every success in that task," he said.

The BBC's Chris Morris at the UN says some believe Mr Ban is too low-key and that the UN needs a higher-profile candidate to lead it through difficult times.

However, the most powerful member states, particularly the US, want a world-class administrator rather than a globe-trotting diplomatic star - and in Mr Ban they may have found their man, he adds.