NDC Will Prioritize Welfare Of The Aged – Jane Naana 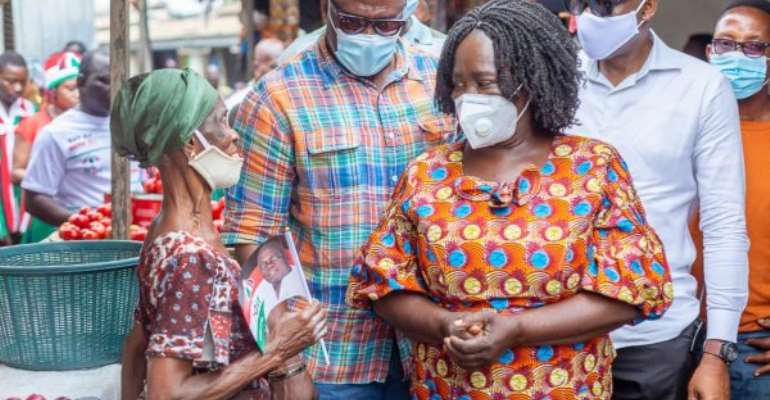 In the quest to promote the welfare of the aged, Professor Naana Jane Opoku-Agyemang, Vice Presidential Candidate of the National Democratic Congress (NDC) has given the assurance that the welfare of the elderly will be prioritized by the next NDC administration.

“The welfare of our senior citizens is critical to us,” she said.

Prof. Opoku-Agyemang, who gave the assurance during an interaction with aged citizens at the AYA Community Centre in Ampain in the Ellembelle District of the Western region, said the NDC had designed a number of social welfare interventions to effectively care for the aged.

According to the Running Mate who regreted the challenges that confronted the aged, the NDC would replicate the concept of the AYA Community Centre across the country.

The AYA Community Centre, with the objective of enriching the lives of aged citizens by providing quality health care and feeding, and recreational and vocational engagements in a safe environment, is currently taking care of over 3,000 aged people in Ellembelle District.

The Centre also had a food bank that served daily meals and weekly food items to the elderly and needy people in the communities.

Prof Opoku-Agyemang, commended the Centre for the immense contribution towards enhancing the welfare of the elderly, and assured aged people across the country, especially in communities, where the aged were labeled as witches, of similar support.

She commended the beneficiaries for engaging in recreational and vocational activities in the facility, and announced her intention to create a platform for them to share their experiences with the youth.

The Vice Presidential candidate, explained that having their life experiences compiled in a book would enable young people to learn to become productive citizens.

Prof. Opoku-Agyemang, who met the beneficiaries during her campaign tour of the region, was accompanied by , Mrs Matilda Amissah-Arthur, and Mr Emmanuel Armah Kofi Buah, Member of Parliament for Ellembelle and Chief Executive Officer of the Centre, and Mr Sam Pee Yalley, former Ghana High Commissioner to India, among others.

Mr Yalley in his remarks said the NDC believed that replicating the concept across the country would ensure that the elderly were comfortable in their old age, and also helped to protect them against challenges, such as neglect and labeling as witches and wizards.